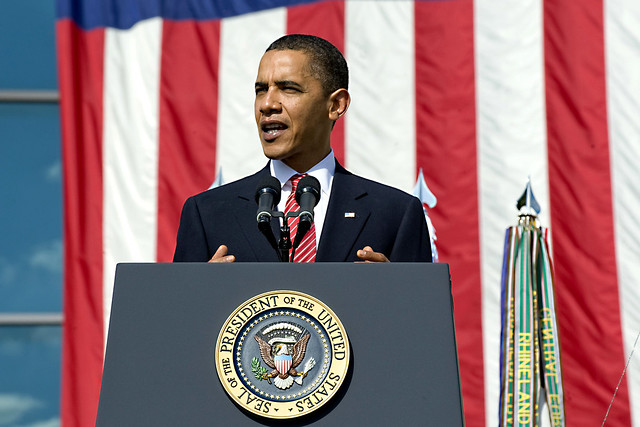 President Obama delivered a statement from the White House on Tuesday regarding the situation in Ukraine. The president accused Russia of launching artillery strikes into sovereign Ukrainian territory.

The president’s remarks were delivered two days after the US government released satellite images purporting to show Russian rockets being fired into Ukraine. The Obama administration is also accusing Russia of arming separatists in Eastern Ukraine with heavy weapons. The images were taken between July 21 and July 26, just days after the downing of Malaysia Airlines Flight MH17.

The president contends that Russian military equipment has been transferred across the border to the separatists. The administration is working with European nations to build a unified response. The president said that he spoke with several foreign leaders yesterday, including German Chancellor Angela Merkel, a key player in the region.

President Obama announced that the US is imposing new sanctions on Russian energy, arms and finance. The US will block the export of goods to the Russian energy sector for American companies. It has also added more Russian banks and defense companies to its growing list of sanctions.

“What we can do is increase the [monetary] costs” for Russia’s actions through the use of sanctions, the president said.

The European Union is joining the US in imposing sanctions, although on a more limited basis — prohibiting arms exports and imports. As CNN reports:

The sanctions also will block new arms contracts between Europe and Russia, prohibit the export of European goods that can be used for both civilian and military purposes, and limit the export of energy-related equipment.

“Have made a weak Russian economy even weaker,” Obama said. Their financial sectors are “feeling the pain”.

However, the president struck a diplomatic note, saying that, “It does not have to be this way. This is a choice that Russia, and President Putin, chose to make. There is a better choice.”

The president said that de-escalation and diplomacy are the preferred path, although the US “will continue to support the people of Ukraine.”

Asked by CBS reporter Bill Plante if the US is engaged in a new Cold War with Russia, the president firmly dismissed the suggestion.

The president added that, “What [the Ukrainians] can’t accept is Russia arming separatists.”