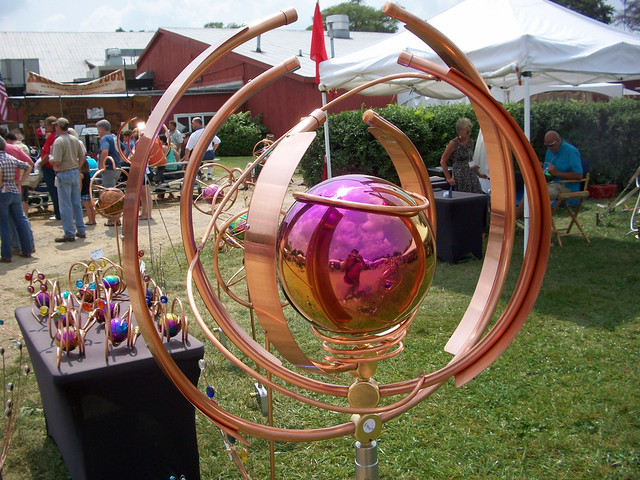 It was a balmy summer afternoon. The smell of deep-fried dough with a dash of sugar and cinnamon wafted through the air. Children gleefully watched on as a magic show dazzled their adolescent eyes. And adults sweated profusely under the unrelenting sun, seeking shade wherever possible and downing bottles of water like no tomorrow.

Yes, it is festival season in Northern Indiana.

The Amish Acres Arts and Crafts Festival got underway last Thursday and ran through Sunday. This reporter got a taste of the summer-time fun firsthand, right in the middle of Indiana’s Amish Country.

A historic farmhouse, century-old farm equipment, and a barn filled with livestock greet guests as they enter the festival. A tractor ride offers both adults and children relief from walking, while a helicopter ride sails through the skies, providing a brief overhead view of the grounds. Others enjoyed swan-shaped paddle boats in the pond that serves as the geographic center of the premises.

Vendors from across the nation dotted around the pond in rows of tents, highlighting their wares to eager shoppers. Nearly 300 artists, craftsmen and food vendors from 30 different states participated in this year’s event.

Some of the more notable booths included fantasy-themed paintings, seemingly plucked directly from a Disney fairytale. Doting sheep with pun-filled titles. Wood carvings of any variety of fish, a bald eagle and an alligator.

“It took about three weeks to make the gator,” the Florida-based vendor told me. “The teeth alone took a day.”

Others pandered to hometown partisans. Notre Dame-themed clothing, paraphernalia and a replica of Notre Dame Stadium itself were among the items on sale.

A surprising number of Christmas decorations were also on display. Christmas in July, indeed. Apparently it’s never too early for Christmas these days.

All told, the thousands of visitors to Nappanee — a town that more than doubled in size during the event — got a small taste of life in rural America. I, for one, look forward to visiting again next year.

Exploring Michiana is a South Bend Voice feature that looks at the cultural and historical roots of the greater South Bend region. It is the regional equivalent of our Rediscovering South Bend series.