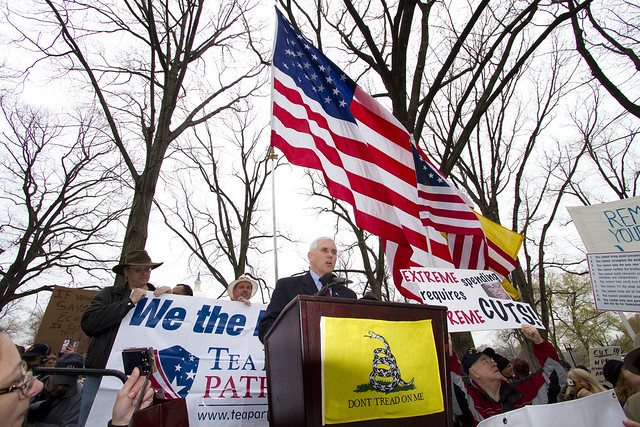 Indiana Governor Mike Pence sent an open letter to President Obama last week, demanding the immediate deportation of children seeking refugee status in the United States. The Department of Health and Human Services has placed over 200 of these children with sponsors in Indiana. Pence complains that HHS did not notify his office and that the children would pose a tax burden on the state.

“While we feel deep compassion for these children, our country must secure its borders and provide for a legal and orderly immigration process,” Pence writes in the letter. “Those who have crossed our border illegally should be treated humanely and with decency and respect, but they should be returned expeditiously to their home countries to be reunited with their families rather than being dispersed around the United States in sponsored placement or long-term detention facilities. Failure to expedite the return of unaccompanied children thwarts the rule of law and will only continue to send a distorted message that illegally crossing into America is without consequence.”

Pence’s words sound reasonable enough. Most Americans — and indeed, most Hoosiers — are compassionate people who support immigration. Phrases like a “legal and orderly immigration process” and treating immigrants “humanely and with decency and respect” are also promising signs.

But it turns out that Pence’s words ring hallow. Pence is, of course, an opponent of comprehensive immigration reform. He has staked a hard-right position on immigration that emphasizes militarizing the US-Mexico border, deportation, and harsh penalties for undocumented migrants such as Arizona’s SB 1070, aka the “show me your papers” law. He even supported a 2004 bill that would have required hospitals to gather immigration status information prior to treatment.

It was such a radical bill that only 88 Representatives voted for the bill while 331 voted no, including a majority of Republicans and nearly unanimous Democratic opposition. Pence joined those who voted to require deportation proceedings to be held for undocumented immigrants who sought medical treatment in our nation’s hospitals. He was among the likes of Tom Tancredo, Steve King and J.D. Hayworth (who ran to the right of John McCain in 2010, forcing the senator to ditch his support of comprehensive immigration reform and famously say “build the damn fence” in a TV commercial).

In Congress, Pence voted against the DREAM Act, which would provide a pathway to citizenship to potentially millions of undocumented children who have lived continuously in United States since childhood, graduated from American high schools and colleges, and did not break any laws. These are children who came to this country through no choice of their own, know no other country than America, assimilated to American culture, and yet Pence still wants to see them deported. Pence’s positions are indeed starkly different from the “deep compassion” that he clings to for political cover.

Even worse is Pence’s lack of concern for the well-being of the children who are only recently crossing our border. The truth is that the bulk of these children come from poverty-stricken and violence-plagued countries in Central America where the US drug war has ravaged countless lives and led to a murder rate of 90.4 per 100,000 people in countries such as Honduras, which has the highest murder rate in the world according to UN data. In other words, the average person in Honduras — where the life expectancy is 71 years — would have a 6 percent chance of being murdered during their lifetime. Put another way, imagine a classroom of 20 children where 1 in 20 would die from homicide. It’s not a pretty picture but it is the reality that Pence fails to mention in his quest for political points from his rabidly anti-immigrant base. He acts as if deportation is a safe and humane response to the crisis, when it is in fact close to a death sentence.

Pence is not alone. The latest insult came from Representative Todd Rokita, an Indiana Republican who suggested that the asylum-seeking children may be infected with the deadly Ebola virus.

“He said, look, we need to know just from a public-health standpoint, with Ebola circulating and everything else — no, that’s my addition to it, not necessarily his — but he said we need to know the condition of these kids,” Rokita said in reference to a conversation that he had with Representative Larry Bucshon of southern Indiana.

Sadly, Rokita is not the first Republican to make the suggestion of diseased undocumented children crossing our border, a wholly inaccurate and race-baited comment. But it does highlight the extent that some Republicans are willing to go in order to generate fear among the general public about the supposed threat of “illegals”.

Indiana’s elected Democrats have not been much better. Senator Joe Donnelly gave an evasive response when asked what should happen to the asylum-seeking children.

“What’s next for those children is to have immigration hearings where it’s decided whether or not they can stay in this country,” Donnelly said this week. “The people of this country elect their House members for a reason. Elect their Senators for a reason. And it’s to make legislation and I think the president ought to let us do our jobs and take care of that legislation.”

Donnelly didn’t mention the fact that Congress had failed to enact comprehensive immigration reform, or even a basic funding bill to deal with the immediate border crisis. Both houses of Congress skipped town for summer vacation without passing a bill into law — although to be fair to the Senate, they did pass an immigration reform bill last year, only to see it blocked in the Republican-led House.

As a member of the House in 2010, Donnelly joined former Congressman Brad Ellsworth and current Rep. Peter Visclosky in shamefully voting against the DREAM Act. Instead of providing clear leadership, Donnelly has only offered the same tired routine of casting himself as a tough centrist without really standing for much of anything — even for vulnerable children. Apparently Donnelly thinks that he was elected to skirt tough issues.

Indiana’s politicians are missing the mark on both sides of the aisle, but particularly on the Republican side — all to score political points on the backs of children. Pence uses lofty words and statements of compassion to pretend that he is staking a moderate position when his voting record is far-right on immigration. Rokita flagrantly deceives the public on serious medical issues. And Donnelly fails to provide a counter-balance to the typical Republican assault on immigrants, falling back on his signature persona as a middle-of-the-road politician without caring about the underlying details or what they mean for actual human beings.

The optimist in me wants to say, “at least we don’t have politicians like Iowa Congressman Steve King,” who literally said that DREAMERs were largely just drug mules who have “calves like cantaloupes“. But I don’t like to settle for next to worst. I want politicians who look at the full context of an issue, not just at what makes the best sound byte to advance their career. Unfortunately, I may just be a dreamer myself. Indiana’s politicians are more than willing to score political points on the backs of immigrant children, even if what they say is complete bunk.

As I have already pointed out in the past, it is extremely difficult to immigrate to the US legally. The vast majority of immigration to the US requires a family or work sponsor. Family sponsorship gives priority to immediate family only. If you do not have a family member in the US, you’re more or less out of luck unless you can qualify for a limited number of work visas. To get a work visa you need a sponsorship — but that route gives priority to “persons with extraordinary ability,” “outstanding professors and researchers,” and “multinational managers or executives.” Second preferences go to professionals with advanced degrees. Average workers without familial connections have virtually no chance of legal immigration to the United States.

The current US immigration system gives an enormous incentive to avoid the legal process altogether since it will end at a roadblock for the vast majority of migrants anyway. There simply is no legal pathway for “low-skilled” workers or their children. And current law does not provide a pathway to citizenship for undocumented immigrants of any age, even to the DREAMERs who came as children.

Mike Pence had the power to change the system when he was in Congress. He can talk about feeling “deep compassion for these children” and supporting “a legal and orderly immigration process” that treats migrants “humanely and with decency and respect”, but when he was in Congress, he voted like an anti-immigrant xenophobe. He supported dumping billions into ineffective Berlin Wall-like border fences that militarized our borders. He supported a bill that would have required hospitals to ask about the legal status of patients, seriously endangering their lives since seeking medical treatment would have put them at risk of deportation. He voted against the DREAM Act to give undocumented youth a chance at the American Dream. And now he callously wants to send asylum-seekers back to countries where their chance of death at the hands of violent cartels is roughly 1 in 20.

Spare us your “deep compassion”, Governor Pence. If this is what compassion looks like, you can keep it.