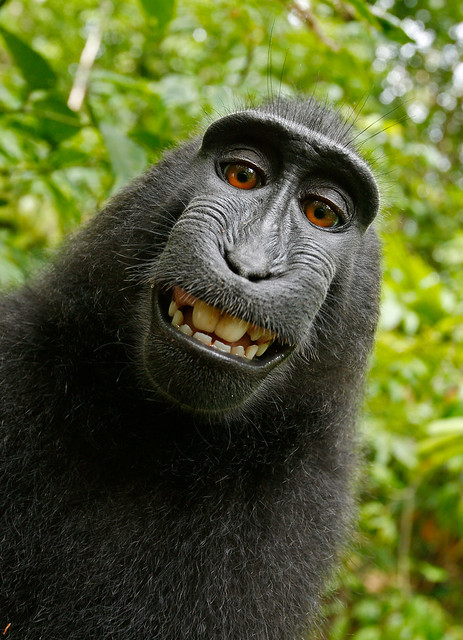 Wikimedia, the media arm of encyclopedic giant Wikipedia, is refusing to remove a “selfie” taken by a monkey in Indonesia that a British photographer claims is infringing on his copyright. David Slater, a nature photographer based in the UK, was in an Indonesian rain forest taking pictures in 2011 when a crested black macaque stole his camera. The monkey took several hundred pictures, including a number of selfies.

“They were quite mischievous jumping all over my equipment, and it looked like they were already posing for the camera when one hit the button,” Slater said at the time. “The sound got his attention and he kept pressing it. At first it scared the rest of them away but they soon came back – it was amazing to watch.”

“He must have taken hundreds of pictures by the time I got my camera back, but not very many were in focus. He obviously hadn’t worked that out yet,” Slater adds.

The photographs appeared in a number of publications throughout the world. However, it appeared on Wikimedia without Slater’s permission. Wikimedia has denied the photographer’s claim of infringement, saying that he is ineligible for copyright protection because the monkey took the photo itself.

The photo credit on Wikimedia says:

“Taken by a macaque in Sulawesi, with David Slater’s camera. As the work was not created by a human author, it is not eligible for a copyright claim in the US. Non-humans cannot own copyrights. This file is ineligible for copyright and therefore in the public domain, because it consists entirely of information that is common property and contains no original authorship.”

Wikimedia is a royalty-free depository of images in the public domain. They have a collection of over 22 million videos and images. They take the position that the monkey is the rights holder, not Slater, and that because copyright law only applies to humans, the photograph is therefore in the public domain.

Slater told The Telegraph that Wikimedia’s decision has “jeopardized [my] income.” He plans to take Wikimedia to court for damages.