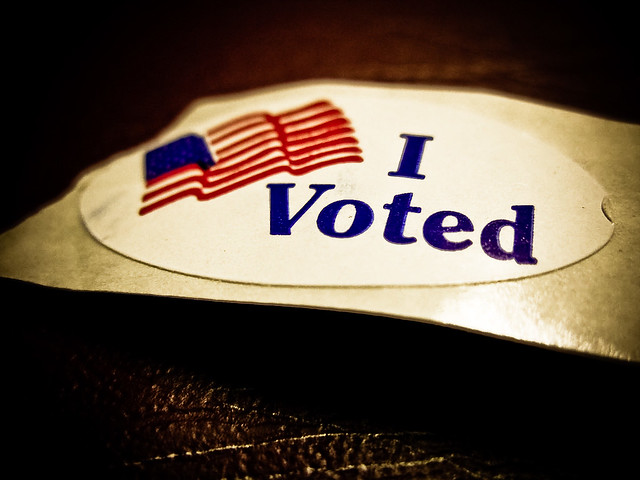 Nearly 700,000 registered voters in Indiana have been put on an “inactive” list that puts them on track to eventually being purged from the voter rolls. The Indiana Secretary of State’s office justifies the move as identifying “outdated and inaccurate voter registration information to help counties improve the accuracy and integrity of Indiana’s voter registration list,” but voter rights groups are concerned that it will disenfranchise potentially hundreds of thousands of legally registered Indiana voters.

The effort begins with a simple postcard. You may have already received one in the mail. The state sent out the postcards to Indiana’s 4.4 million registered voters in May. A second round of mailings went out in June to voters whose addresses were returned as undeliverable. Voters were told to update their voting information by July 24 or they would be placed on a list of “inactive” voters.

The Secretary of State’s office points out that voters on the “inactive” list can still vote in the 2014 general election, the 2015 municipal elections, and the 2016 election (both primary and general). This is because federal law precludes the state from removing “inactive” voters for two election cycles. Simply voting in one of these elections will restore a voter’s status as “active”.

But what if an “inactive” voter decides not to cast a ballot between now and the end of 2016, which is only two years away?

“The county voter registration office will remove him or her from the poll lists,” the Secretary of State’s office says.

In other words, a voter will need to re-register in order to be eligible to vote.

Amy Miller, the president of the League of Women Voters of Indiana, a national voting rights and education group, expressed her concern for Indiana’s move to — as the state puts it — “refresh” its voter rolls.

“I don’t think that [Secretary of State Connie] Lawson is intending this [as voter suppression],” Miller told me. “I think she has a responsibility to see that all Hoosier voters have access to the ballot, have access to ease of registration… but communicating in more methods than just paper and mail, and telling people this is what we’re doing, and this is how to register appropriately.”

Miller says that Indiana’s method of identifying inactive voters is antiquated and susceptible to human error. The people most likely to be disenfranchised are low-income and elderly voters who have limited means to register and reach polling places in the first place.

The League’s president pointed out that she lives on a four word street name. Since the last two words — “ridge” and “drive” — are common street names, a postcard could easily end up at the wrong address. She mentions that her mail often gets cut off at the first three words rather than the full street name. Sending two postcards in the mail will not rectify an error like this.

“Why not have a unified effort between BMV and other state agencies?” Miller asks. “What other mechanism does the state rely on besides USPS? Why don’t they use multiple ways to track down individuals?”

It turns out that the state does have other mechanism that they use to identify inactive voters. As the Secretary of State’s office told me in a statement:

“Voter list maintenance is done on a daily basis in Indiana in several ways. This includes receiving information from the Social Security Administration, Department of Corrections and the State Department of Health to determine if someone has passed away. It also includes removing voters convicted of a crime and put in jail following their conviction and voters who cancel their registration through a cancellation request.”

These methods are likely enough to comply with the National Voter Registration Act of 1993’s (NVRA), a federal law that was intended to expand voter registration. Indiana’s Secretary of State maintains that the NVRA requires their office to use postcards as a means of maintaining an accurate voter roll list in the state.

“The state followed the federal law for the voter list refresh project, which makes voter list maintenance mandatory and spells out the process of how voter list maintenance is to be done to ‘safe-guard’ voters,” said Valerie Kroeger, Secretary of State Lawson’s Communications Director. “If for some reason a person doesn’t get their postcard (for any reason) or they don’t respond and they are marked inactive, they can still vote.”

“Keep in mind, we also tried to notify them twice by mail, as required by federal law, plus we advertised and worked with the local media to educate voters on the process,” she continued. “This is not making the voting process burdensome this is required by federal law. Federal law makes voter list maintenance mandatory and spells out the process we are using (the mailing of two postcards) to do it.”

Voting rights groups dispute the contention that Indiana’s actions are mandated. A reading of the NVRA seems to indicate that while maintaining an accurate voter roll is mandatory, the procedure for doing so is up to the state.

How do other states maintain their voter rolls?

An official with the Illinois State Board of Elections, an independent and non-partisan board made up of both Democrats and Republicans, told me that to the best of his knowledge, the NVRA does not require states to send out postcards in the fashion that Indiana is doing. Voter registration maintenance is conducted on a county-level in Illinois. Most counties in that state utilize a postcard system — not because it is required but because it is cheap.

The League of Women Voters of Indiana’s president is concerned that the state is failing to reach out to voters in a comprehensive way.

Miller says that the state should use “more [of its] databases, more resources to reach out to voters” and identify inactive voters, such as through death notices.

How could we make voting easier in Indiana?

Not surprisingly, turnout is much higher in these states. Four of the top five states for turnout in the 2012 presidential election had same-day voter registration, despite the option only being available in 8 of the 50 states. For instance, 76 percent of voters turned out to vote in Minnesota and 73 percent in Wisconsin, the top two states, both of which have same-day registration. 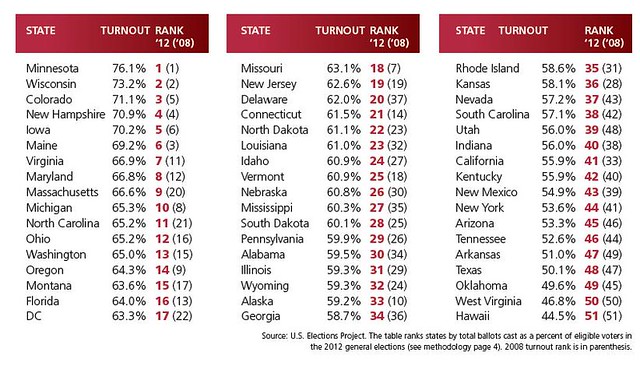 Indiana ranks among the lowest in terms of turnout. Only 56 percent of eligible Indiana voters turned out in 2012. Neither Indiana nor Minnesota were considered particularly competitive on the presidential level in 2012, although Indiana did have a highly competitive Senate and governor’s race. Indiana, it seems, is more intent on keeping people away from the polls than on increasing turnout.

Making voting as simple as possible, while maintaining the integrity of elections, would very likely increase turnout.

“Their kids are sick, they’re trying so hard to go back to school to better their opportunities,” Miller says.

She also stressed the negative impact of voter ID requirements, which is a “solution in search of a problem.”

“I think that unfortunately the voter ID law has impacted a lot of communities and continues to do so,” Miller added. “We support open elections, the ease of elections, and that all citizens have the access to the right to vote.”

In the meantime, it is highly recommended that you check to make sure that your voter information is up to date before the November election. Visit http://indianavoters.com to check your registration status or register to vote online.