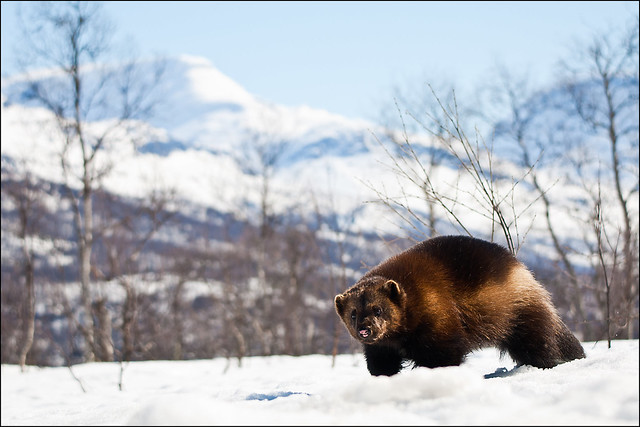 Despite evidence that climate change threatens their habitat, the U.S. Fish and Wildlife Service announced Tuesday that it was withdrawing a proposal to list North American wolverines as a threatened species under the Endangered Species Act. Environmental groups decried the decision, saying it ignored “the best available science” and threatening to sue “unless the Service takes action to protect the wolverine as the Endangered Species Act requires.”

The wolverine, described by the Fish and Wildlife Service (FWS) as “a large but elusive member of the weasel family,” requires deep snow to build sheltered dens in which to raise its young. According to the Center for Biological Diversity, global warming over the next 75 years is projected to wipe out 63 percent of the snowy habitat wolverines need to survive. Experts say there are only 300 wolverines left in the lower 48 states.

But the FWS said: “While it is clear that the climate is warming, after carefully considering the best available science, the Service has determined that the effects of climate change are not likely to place the wolverine in danger of extinction now or in the foreseeable future.”

Whereas with polar bears, scientists were able to point to specific evidence of impacts from climate change, it is more difficult to collect such observations about wolverines, one FWS official said in a memo:

However, for wolverine we are unlikely to ever get this kind of “smoking gun” because they are seldom observed even when radio collared, and the effects of climate changes are likely to be much more subtle, such as slightly decreased reproductive output, fewer prime home ranges that are productive enough to support a female with kits, or decreased connectivity resulting in fewer successful movements between major habitat areas.

Conservation organizations accused the FWS of succumbing to pressure from the states where most of the animals are still found: Montana, Idaho, and Wyoming. In opposing the threatened species proposal, the states expressed uncertainty about climate change predictions and warned that granting federal protections would hurt recreation and development.

“The Obama administration’s short-sighted decision to reject the conclusions of their own scientists and withdraw endangered species protections for these iconic animals is part of a disturbing anti-conservation trend,” Noah Greenwald, endangered species director with the Center for Biological Diversity, said in a press release. “Blatantly ignoring extensive science showing wolverines are in real trouble in order to bow to political pressure from states is precisely the kind of recipe for extinction that prompted passage of the Endangered Species Act in the first place.”

Learn more about wolverines in this film from the Wolverine Foundation:

The Need to Move (Wolverine Foundation) from Conservation Media on Vimeo.