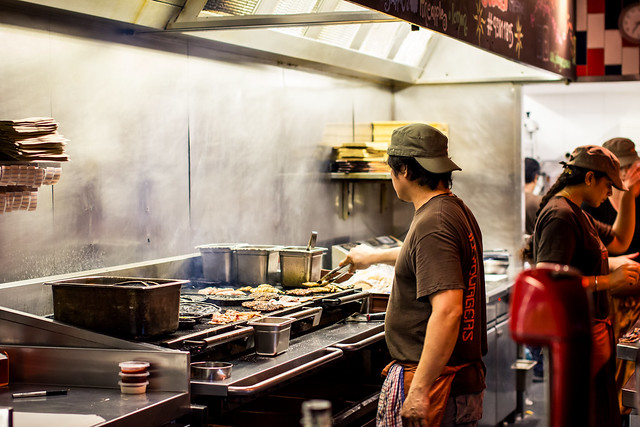 While wages have declined across all sectors in the years following the financial crash of 2008, low-paid workers have been hit the hardest, the National Employment Law Project (NELP) reported this week.

NELP analyzed five groups of median wages in its report, titled An Unbalanced Recovery: Real Wage and Job Growth Trends. Since 2009, while higher-income sectors saw a drop between 2.1 and 2.5 percent, workers in the three lowest-paid groups were hit much harder, with wage declines between 3.6 and 4.6 percent. Some of the hardest-hit professions within the three lowest-paid groups were maids, housekeepers, home health and personal care aides, and restaurant workers, whose wage decline ranged from 5.8 to 8.3 percent.

The study also found that low-paid jobs are on the rise. Despite the stagnant or diminished level of wages more people found work in lower-paid occupations than in any other industry in the past year. Low-wage and mid-wage jobs constituted a combined 67 percent of job growth from July 2013 to July 2014. 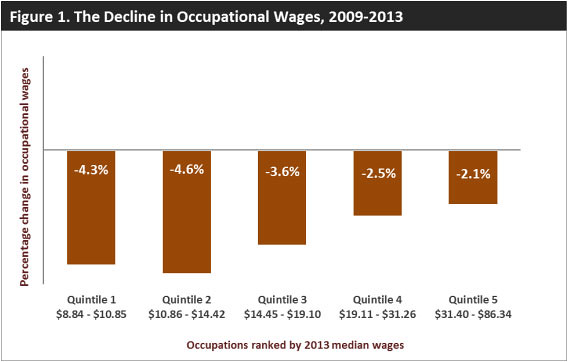 As Think Progress points out, the simultaneous rise of employment rates and decline of wages in the same industries is “troubling”:

Research from last year found that half of the jobs added during the recovery were low paying… These trends may help explain why new data from Sentier Research finds that median household income, or for families in the middle of the income distribution, is lower now than when the recovery began: $53,981 today versus $55,589 in June 2009.

“These real wage declines mean that workers in mid – and low – wage jobs are falling further and further behind,” said NELP’s executive director Christine Owens. “These losses are part of an alarming trend toward greater inequality and a shrinking share of the economic pie going to workers’ wages, especially low – and mid – wage workers . Policymakers in Washington and in our state capitals need to adopt solutions that begin to straighten out our economic priorities and reduce these economic disparities. Raising the minimum wage, which will reverse the declining real value of that critical wage floor, and supporting the right of workers to stick together and negotiate for better pay and working conditions, are good places to start.”

Robert Kuttner, writing for the American Prospect, notes that “[o]ne manifestation of job insecurity is extremes of inequality as corporations, banks, and hedge funds capture more than their share of the economy’s productive output at the expense of workers.”

“The shift in labor markets, from an economy where regular payroll employment is the norm, to one where more of us are performing odd jobs, or have regular jobs with indeterminate schedules, ought to be the top domestic political issue,” Kuttner writes.

NELP, an nonpartisan organization that has been fighting for a higher national minimum wage, has analyzed job growth data twice since 2009 and found that the trend has been consistent every year: real median hourly wages had declined by 2.8 percent last year, on average, across all occupations, with the greatest losses hitting the exact same groups — mid- and low-wage workers, particularly maids, housekeepers, care aides, and restaurant cooks.

Over the next decade, one in four American workers is expected to work a low-wage job.