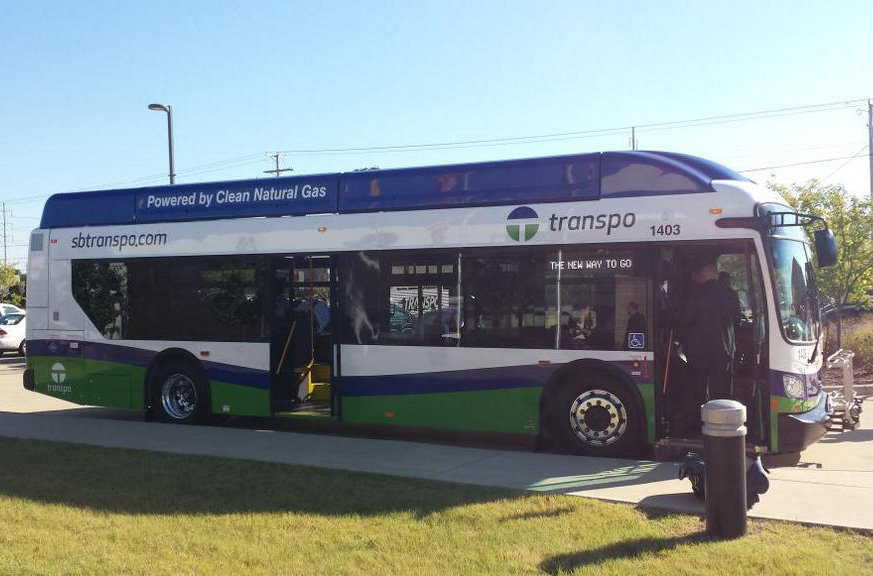 Transpo is set to introduce a new fleet of buses powered with compressed natural gas. The regional public transportation organization, servicing areas in South Bend and Mishawaka, is replacing fifteen year old vehicles that Transpo says have “reached and exceeded their useful life”.

The new fleet will consist of sixteen new fixed route natural gas-powered buses. They come from a company known as New Flyer, whose manufacturing plants are in Minnesota and Winnipeg, Canada. The New Flyer Xcelsior model will replace Transpo’s aging Gillig Phantoms, which are gasoline-powered.

The Xcelsior is the same length as the current fleet at thirty-five feet long. It will have four additional seats per vehicle.

Transpo says that they will “feature a sleek, contemporary look representing the connectivity that Transpo provides throughout South Bend and Mishawaka.”

The buses are being purchased using Federal Transit Administration funds, which require a 20 percent match from Transpo. The transit agency says that the local matching funds are coming from advertising revenue and cash fares.

“This is an exciting time for Transpo”, said David Cangany, Transpo General Manager. “As we strategically plan for the future, the new buses utilizing CNG will help reduce our operating costs and ultimately provided us with the needed resources to maintain our current level of service.”

South Bend’s city government and Transpo have previously announced a partnership for a fast-fuel compressed natural gas facility in the region that will be open to the public. The agency expects to break ground later this year on their current property with the goal that it will be operational in early 2015. The new buses will become operational once the fueling station is installed and training takes place.

“The partnership demonstrates how public transit is an economic engine in the community, providing fleets and organizations across the regions the resources necessary to explore CNG as an alternate fueling option,” Transpo says.

Area riders can get a first look at the new buses next month at a free event open to the public. The first event will be during Downtown South Bend’s “Kids’ Night Out” First Friday on October 3. A new bus will be on display near the former College Football Hall of Fame in downtown South Bend from 5:00 to 7:00 p.m.

South Bend Voice reached out to Transpo for comment on how much money the buses actually cost and what the projected long-term savings would be. They did not respond to our inquiries at the time of publication. We will update the story if they do.