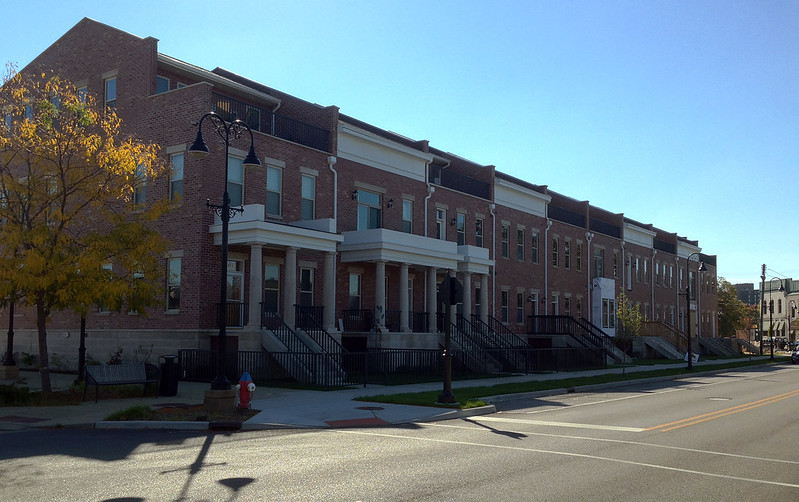 Yesterday, we looked at a new downtown South Bend restaurant that is part of a bigger project to reinvigorate the East Bank neighborhood along Niles Avenue and Jefferson Boulevard. Smoothies, Crepes & Coffee is the creation of Dave Matthews, a local developer and owner of Matthews LLC.

Matthews is a lifelong resident of the area, graduating from Adams High School before earning a pair of degrees from Purdue. He came back to South Bend after undergrad studies to pursue a Master’s degree at Notre Dame, which he put on hold to focus on Matthews LLC, a business that has invested heavily into downtown redevelopment.

How do you turn downtown South Bend into a vibrant, walkable urban environment?

The city clearly has a number of built-in advantages as the cultural, economic and governmental hub of the region. Downtown South Bend already has over thirty restaurants, numerous entertainment spots, office towers, and shops. It’s a recipe for a thriving urban landscape.

What it lacks is dense housing and foot traffic to keep businesses packed for the long haul.

Downtown has numerous empty parking lots and parking garages, but not many “restaurants facing restaurants.” As Matthews explains, there is nothing wrong with a restaurant facing a river, a lake, a mountain, or a park — scenic locations that add to the ambiance of a location.

But those that face parking lots feel isolated from the action that you expect in urban environments. The lack of businesses facing each other does not lend itself toward a lively street with pedestrians strolling around, eying the next store to visit.

The crepe stand is just one piece of a bigger puzzle toward making the eastern side of downtown — officially known as the East Bank Village — a viable option for shoppers and diners alike. When the creperie is profitable, Matthews will move into phase two of the project, which includes food trucks. 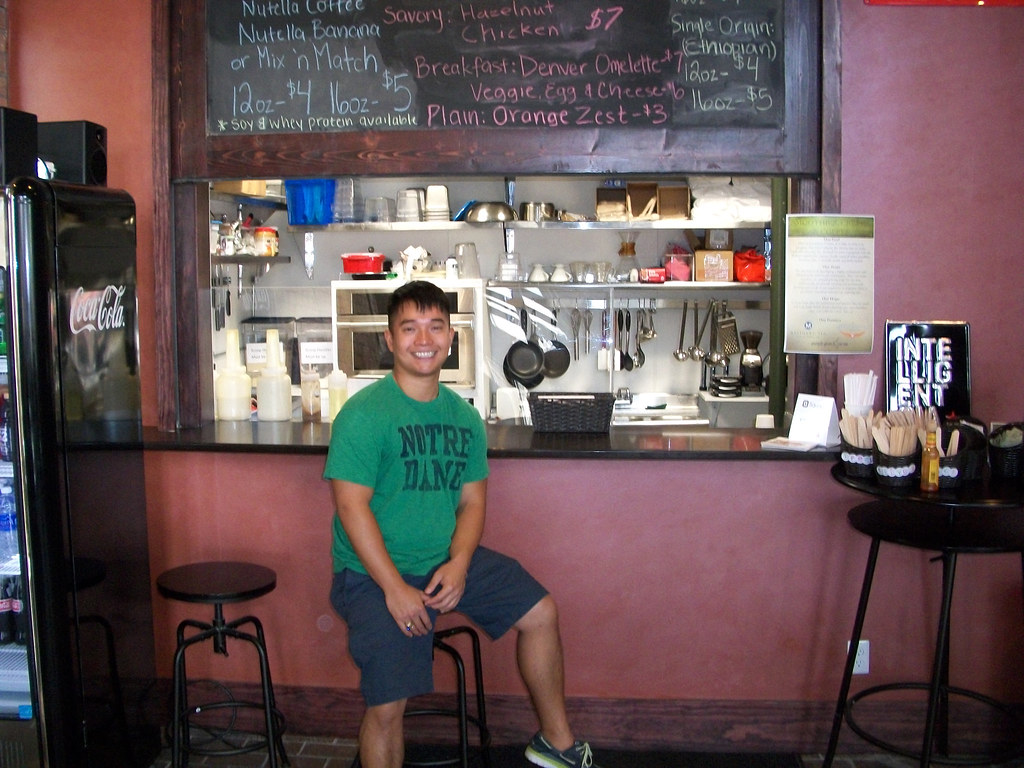 “We want to entice local chefs who have the aspiration to open up their own restaurant someday but they need to have that experience of owning and actually operating their own business. So we want to entice that target audience to come and say, ‘You know what, sure, I would love to run a food truck of my own,'” says Khoa Huynh, Director of New Business Development at Matthews LLC. “We want to see, can we take the same procedures — the playbook if you will — from the crepe stand, give it to these aspiring chefs and have them run their food truck successfully.”

The vision that Matthews has set is re-developing a large chunk of the East Bank neighborhood along Niles Avenue. Matthews previously built the River Race Townhomes, a series of ten townhomes across the street from the East Race, as well as the East Bank Townhomes along the St. Joseph River with magnificent views of downtown South Bend. A building along Jefferson Boulevard has been newly renovated for retail space. 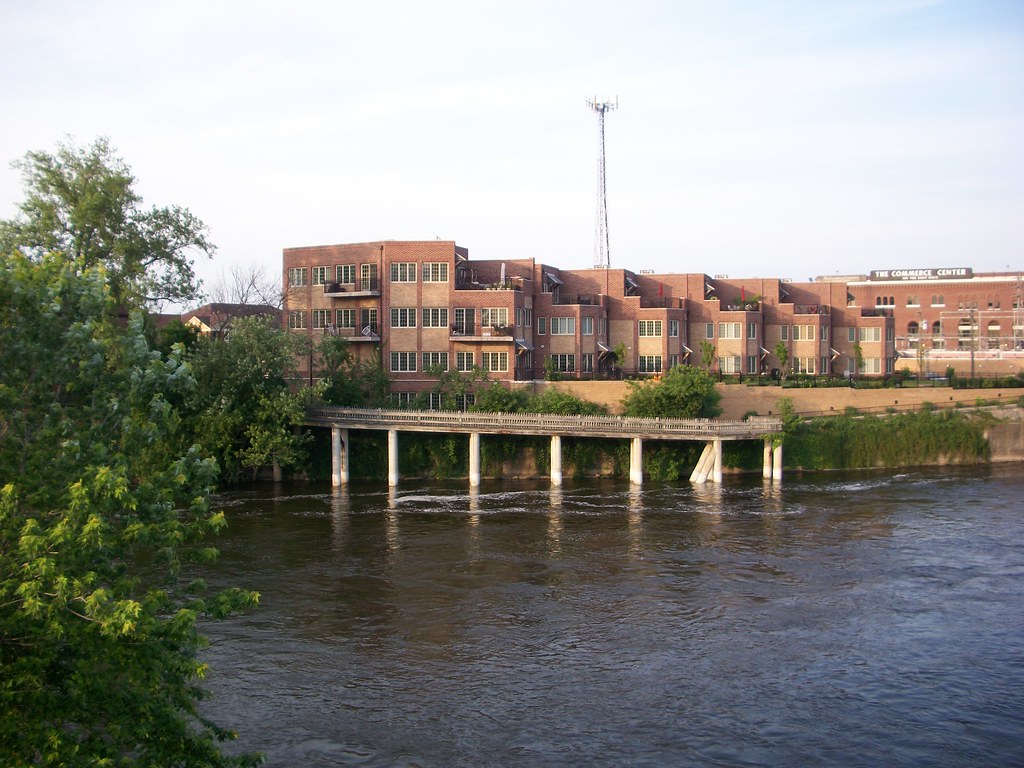 Matthews faced resistance from the Area Board of Zoning over his plans to build a six story mixed use development at Jefferson and Niles. The building would exceed the five story limit for the East Bank neighborhood. The Area Board of Zoning twice rejected the proposal before the South Bend Common Council voted to overrule the zoning board. The $8 million development — known as River Race Flats — will eventually include apartments, office space, restaurants and an outdoor plaza.

Now that the project is back on track, Mathews can work out the fine details of the third phase of development, which includes another restaurant plan far more ambitious than the crepe stand. 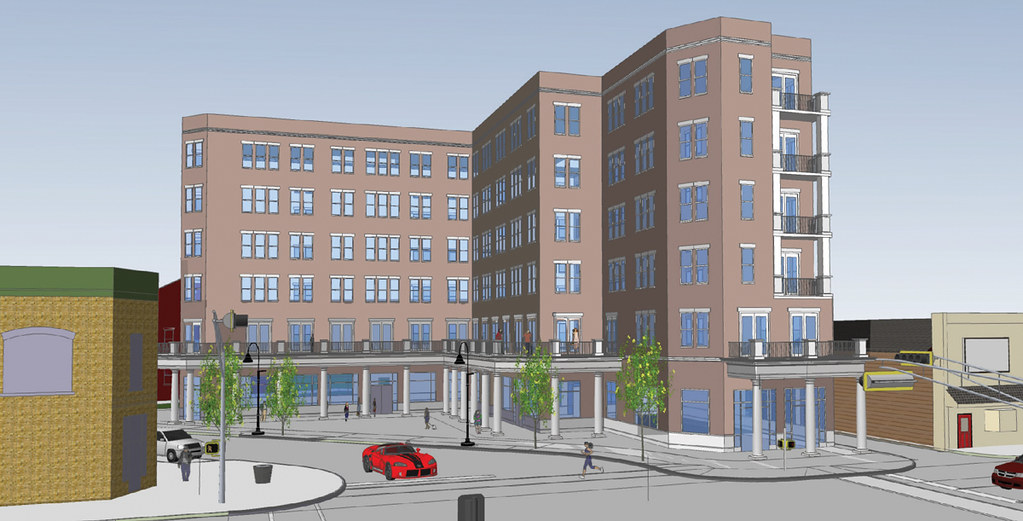 Matthews would eventually like to see five restaurants open on the first floor of the River Race Flats, the six story building that will be across from the Emporium Building where the creperie is located. If they can demonstrate their bona fides, the food truck chefs mentioned earlier can earn their stripes to run a full service restaurant.

The goal is to have five separate restaurants feeding off of each others’ energy, drawing shoppers to Niles and Jefferson across the river from downtown South Bend. If his plans come to fruition, there will be no fewer than nine restaurants within two blocks of the crepe stand, each offering their own niche to the growing young urban professionals taking root in the East Bank neighborhood.

While low-rise development has dominated the scene for decades with the suburban sprawl of Grape Road and Granger, New Urbanism seems to be taking off in a big way in South Bend. Urban developments in places like downtown, the East Bank neighborhood, and Eddy Street Commons are leading the way.

When the East Race Flats are complete sometime next year, it will be a triumph for high density, mixed use development in South Bend. Mixed use buildings are rising from formerly empty lots. It’s a big, much-needed change for the city of South Bend and the region.

Special thanks to Angel Cortes for his photography, camera work and post-production.