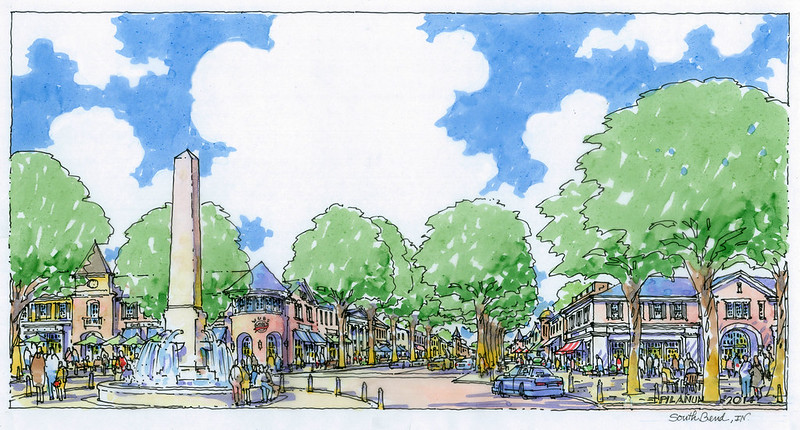 South Bend’s West Side has long been a part of town that has felt neglected.

Dilapidated buildings, shuttered store fronts, food deserts, unsafe sidewalks and roads in disrepair are just some of the common complaints that you might hear from West Side residents.

The city hopes to fix at least some of those problems with the West Side Main Streets Plan, which aims to revitalize two of the major West Side gateways into South Bend: Lincolnway and Western Avenue. The city is in the process of adding the two thoroughfares to its airport TIF district.

South Bend Voice spoke to city planner Mike Divita about a plan that is in the works for Lincolnway West from William Street in downtown South Bend to Maplewood near the airport.

The goal is to reconfigure Lincolnway West “into a street that is safer and creates an environment more conducive to business and residential investment.”

The road as it is designed today feels more like a divided highway than a city street. The current posted speed limit of 35 is often ignored. It is not uncommon to see cars going 45. It is possible to run the full length without ever needing to stop for a stoplight.

“Once carrying the US 20 designation, Lincolnway West had served as a highway whose purpose was to move large amounts of traffic. That character remains, promoting high speeds, often in excess of posted speed limits. Walking or bicycling is unpleasant or even dangerous, and businesses go unnoticed by passersby,” the city says in a fact sheet for the project.

The city hopes to slow down traffic slightly and make the area more pedestrian and bike friendly, as well as car-friendly with the addition of on-street parking.

“Generally, these kinds of conversions with the experience from other communities, speeds might drop from anywhere between zero and four miles per hour,” Divita says.

Once implemented, Lincolnway will be converted from a four lane street (two lanes each way) to a two lane street (one lane each way) with a left turn lane. On-street parking and bike lanes will be added throughout much of the stretch (see chart below for more details).

The goal is that these improvements will not only improve the quality of life for neighborhood residents, but also make the street more attractive for businesses.

According to Divita, similar reconfigurations have been successful in other cities across the country in places like Seattle and rural communities in Iowa with highways running through their neighborhoods.

Divita says that the Smart Streets initiative has a number of advantages for local businesses. Building or expanding a parking lot is expensive. The addition of on-street parking along Lincolnway, which currently does not have it throughout most of the length, will make business ownership more attractive.

The visibility — especially with one-way streets that the city is converting downtown — is also lower with their current configuration. Slowing down the traffic ensures better visibility and also makes both pedestrian activity and biking more attractive, creating a more vibrant urban atmosphere.

In addition to the reconfiguration, the entire length will be resurfaced with a thin asphalt overlay. The city will also test possible removal of traffic signals at Blaine Avenue, Johnson Street and Maplewood.

Weather permitting, work will begin this fall with tree planting, which will run the street’s entire length. Repavement could begin as soon as May 2015 with an end of June completion date. The city estimates that the project will cost in the ballpark of $1 million.