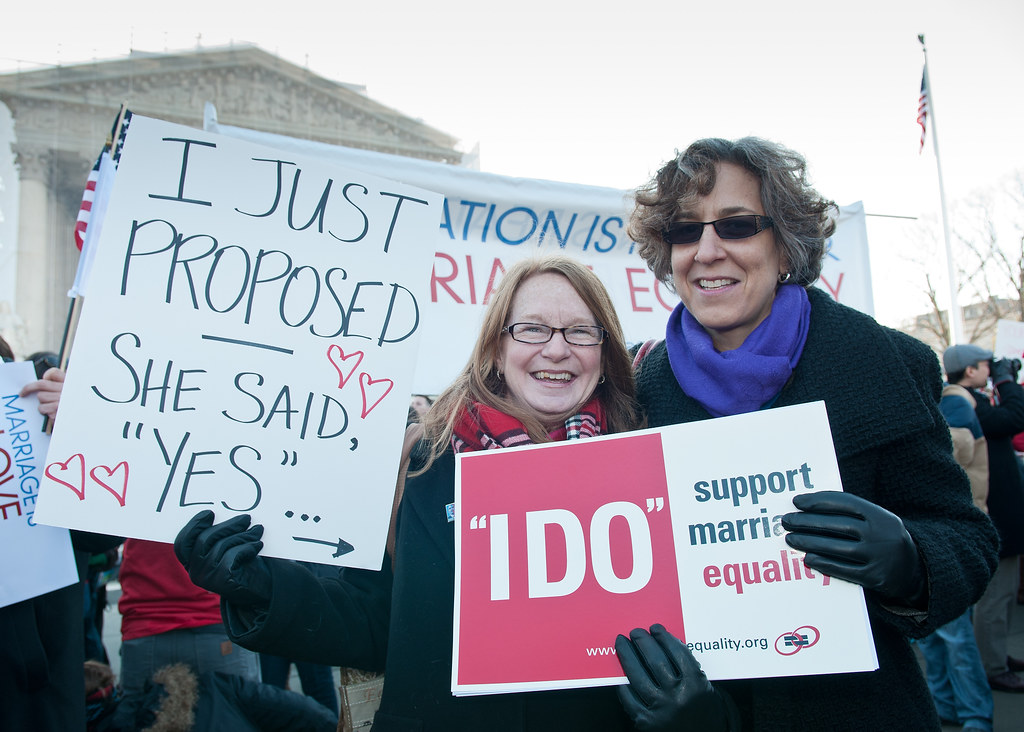 2014 will go down in history as the year of marriage equality.

Same-sex marriage bans have fallen like dominoes across the United States since the Supreme Court ruled in 2013 that the Defense of Marriage Act was unconstitutional. Lower courts have used the rationale in the Windsor v. United States ruling to throw out marriage bans.

The movement towards full marriage equality has been rapid in the past year. The number of states that legally recognized same-sex marriage doubled in 2014. 35 states plus the District of Columbia now recognize same-sex marriage and issue marriage licenses to same-sex couples.

All of those states, with the exception of Illinois, were the result of court rulings striking down marriage bans.

Over 60 percent of the United States population now reside in states where same-sex marriage is legal.

Indiana saw its ban struck down in June. Marriage licenses were issued in Indiana for several days prior to the state’s appeal. Indiana Governor Mike Pence instructed the state’s agencies to not recognize those marriages.

Ultimately, the 7th Circuit Court of Appeals, which has jurisdiction over Indiana, Illinois and Wisconsin, stuck down the Indiana and Wisconsin bans.

“It was tradition to not allow blacks and whites to marry – a tradition that got swept away,” Judge Richard Posner, a Reagan appointee, said during the hearing. Posner called the state’s same-sex marriage ban “a tradition of hate … and savage discrimination.”

Indiana appealed the ruling to the Supreme Court, which declined to hear the case, paving the way for marriage equality in Indiana and ten other states.

Bans have also been overturned in Arkansas, Mississippi and Texas but the rulings have been stayed pending appeal.

The state of Florida has thus far refused to allow same-sex couples to apply for marriage licenses following a ruling that the state’s ban was unconstitutional. Florida’s attorney general has asked a federal judge to clarify if his ruling applied to all 67 counties.

Only two federal courts have sided with states defending their marriage bans. A federal judge in Louisiana upheld that state’s same-sex marriage ban, while the 6th Circuit Court of Appeals upheld bans in Michigan, Ohio, Kentucky and Tennessee.

If the Supreme Court takes the case and rules in favor of marriage equality, same-sex marriage would become legal in all 50 states.