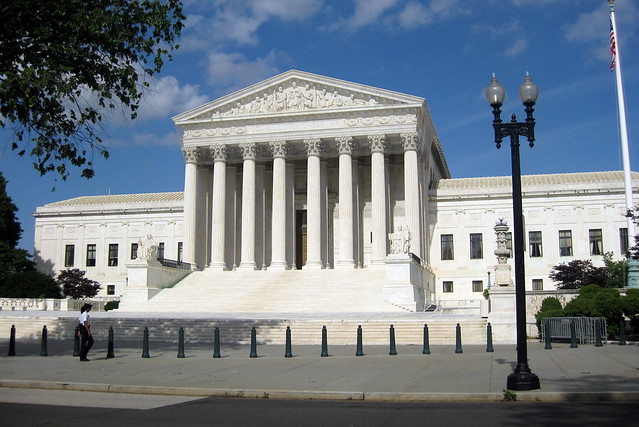 If you were surprised to learn four years ago in Citizens United that corporations were people in the eyes of the Supreme Court, you probably were not as surprised today when a 5-4 conservative majority followed the same logic in gutting the Affordable Care Act’s contraception mandate. The ACA requires employers with 50 or more workers to provide comprehensive health insurance that includes some form of contraception. The Obama administration has specifically exempted churches and provided accommodations to other groups including religious non-profits such as hospitals and schools.

In its ruling, the Supreme Court extended protections of the Religious Freedom Restoration Act (RFRA), signed into law in 1993, to businesses. The RFRA says that the government cannot “substantially burden a person’s exercise of religion” unless it can demonstrate a compelling governmental interest and that the action is the least restrictive means of achieving that interest. The Court’s conservatives are saying once again that corporations are people, against the express words of Congress, which limited the RFRA to “persons”.

The Supreme Court held that the ACA’s exemptions did not go far enough in protecting the rights of for-profit corporations. The Court has given so-called “closely held corporations” a new religious exemption under the law. Closely-held corporations are ones where a single-family owner exists without private shareholders. Sole-proprietorships and partnerships would also be affected. Shareholder-controlled corporations will still need to comply with the contraceptive mandate.

The Obama administration argued that while Hobby Lobby, the corporation bringing the lawsuit to the Supreme Court, would be required to provide contraceptive coverage under its health plans, it had a number of options at its disposal. Its corporate leadership could have chosen to have the company pay a $475 million per year fine for failing to cover contraception in their health insurance plans. In addition, they had the option of dropping the plans altogether, and would have faced a minimal $26 million fine rather than the larger fine.

Justice Alito writes that the ACA would “seriously violate [Hobby Lobby’s] sincere religious belief” and that failure to comply amounted to “severe economic consequences” for the company. He suggests that a less restrictive approach would be for the government to pick up the full tab of employers who have deeply-held religious beliefs.

Justice Ruther Bader Ginsburg warned of the potential repercussions from the ruling and rejected Alito’s contention that the government should pay the cost of an employer-provided plan.

“In a decision of startling breadth, the Court holds that commercial enterprises, including corporations, along with partnerships and sole proprietorships, can opt out of any law (saving only tax laws) they judge incompatible with their sincerely held religious beliefs,” Ginsburg wrote in her dissent.

She also points out that the Court’s majority did not say that the First Amendment protects businesses on religious grounds, but rather that it was the RFRA that protected it.

“In the Court’s view, RFRA demands accommo¬dation of a for-profit corporation’s religious beliefs no matter the impact that accommodation may have on third parties who do not share the corporation owners’ religious faith—in these cases, thousands of women employed by Hobby Lobby and Conestoga or dependents of persons those corporations employ.”
Rhetorically laughing at contentions that the government does not have a vested interest in advancing both health insurance and contraception, Ginsburg notes that the cost of health care for females is high compared to their male counterparts. These include costs of preventative health screenings, co-payments, and contraception, many of which only apply to the female gender.

Ginsburg notes that the Senate rejected an amendment to the ACA that would have put the opinions of employers above the health outcomes of its employees. She writes that “increased access to contraceptive services… would yield important public health gains.”

Ginsburg argues that relying on the RFRA is a flimsy legal argument. “Until this litigation, no decision of this Court recognized a for-profit corporation’s qualification for a religious exemption from a generally applicable law, whether under the Free Exercise Clause or RFRA,” Ginsburg notes. “The absence of such precedent is just what one would expect, for the exercise of religion is characteristic of natural persons, not artificial legal entities. As Chief Justice Marshall observed nearly two centuries ago, a corporation is ‘an artificial being, invisible, intangible, and existing only in contemplation of law.'”

Marshall’s accurate notion that corporations are “artificial being[s]” is no longer the case in American law. At least in the mind of the conservative Supreme Court majority, corporations are indeed people entitled to the exercise of religion, however that may be applied. It’s an absurd argument, but it is one that will dominate the Court at least while Roberts, Alito, Thomas, Scalia and Kennedy are on the bench.

Read the full decision, including Justice Ginsburg’s dissent, below: