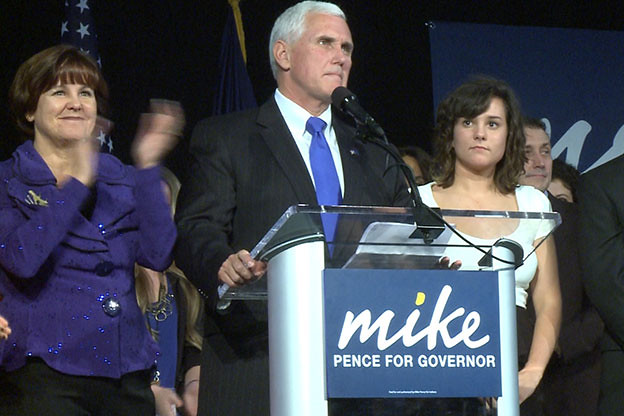 Indiana Governor Mike Pence has sent a memo to state agencies telling them to not recognize same-sex marriages performed in the state. Indiana’s ban on same-sex marriage was struck down in federal court on June 25. Thousands of same-sex couples married across the state throughout a three day period before an Appeals Court granted a temporary stay of the ruling, putting further marriages on hold pending appeal from Indiana’s Attorney General Greg Zoeller. Both Pence and Zoeller are elected Republicans.

“Same-sex couples, who would otherwise qualify to marry in Indiana, have the right to marry in Indiana,” Judge Richard Young wrote in a 36 page ruling. “These couples, when gender and sexual orientation are taken away, are in all respects like the family down the street. The Constitution demands that we treat them as such.”

Pence’s chief legal counsel said in a memo that state agencies should function as if the court order had not been granted. Several county clerks had similarly refused to comply with the court order, citing personal religious beliefs.

“My first reaction was ‘no way!’ I couldn’t believe it. I thought Indiana would be one of the last states to legalize same-sex marriage,” Fernando Sanchez told us at the time. “I still can’t believe it.”

Indiana’s gay marriage ban is pending an appeal before the 7th Circuit Court of Appeals in Chicago. If the 7th Circuit Appeals Court upholds Judge Young’s ruling, gay marriages will resume in Indiana. No federal court has sided against marriage equality since the Supreme Court struck down the Defense of Marriage Act in 2013.