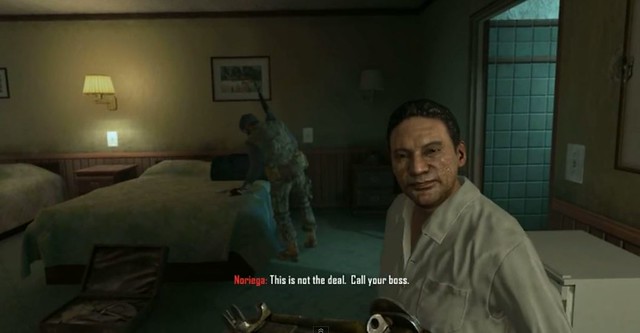 Manuel Noriega is suing video game publisher Activision Blizzard for his depiction in a 2012 Call of Duty game. The 80 year-old former dictator of Panama wants to recoup lost profits and damages. Noriega was ousted in George H. W. Bush’s 1989 invasion of Panama and sent to US prison on drug trafficking charges. He returned to Panama in 2011.

“In an effort to increase the popularity and revenue generated by Black Ops 2, defendants used, without authorization or consent, the image and likeness of plaintiff in Black Ops 2,” Noriega’s lawyers allege. They also claim that the game portrays the former dictator as “a kidnapper, murderer and enemy of the state.”

Tech lawyer Jas Purewal told the BBC that Noriega likely does not have much of a case in US courts since he is not a citizen.

“In the US, individuals have what’s called the right to publicity, which gives them control over how their person is depicted in commerce including video games,” Purewal said.

“It all focuses upon the American legal ability for an individual to be only depicted with their permission, which in practice means payment of a fee. But Noriega isn’t a US citizen or even a resident. This means that his legal claim becomes questionable, because it’s unclear on what legal basis he can actually bring a case against Activision.”

Below we have video of the Noriega mission from Call of Duty: Black Ops II:

Game Freaks 365 reached out to Activision for comment. They had not responded at the time of publication.

This article originally appeared on our sister site, Game Freaks 365.