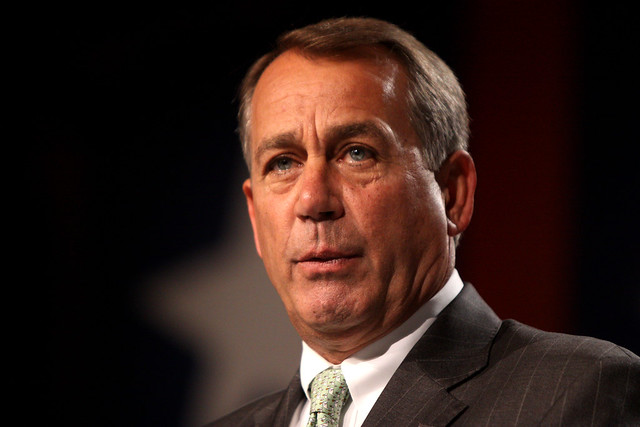 The Republican-controlled House of Representatives voted on Wednesday to sue President Barack Obama. The vote comes in the middle of an election year where base voters are expected to drive turnout in the historically low-turnout midterm elections.

The vote was 225 to 201 in favor of the lawsuit. Five Republicans voted against it. No Democrats voted in favor of suing the president.

House Republicans claimed that their actions were necessary to curb presidential authority, which they claim was being abused when the president delayed the employer mandate in the Affordable Care Act. Republicans have voted to repeal, delay or de-fund the health care law 50 times as of March 2014.

Ironically, their latest action would actually enforce the Affordable Care Act (ACA). The ACA requires employers with more than 50 employees to offer affordable health insurance to employees who work more than 30 hours per week.

As ABC reports, the law “defines affordable as premiums of no more than 9.5 percent of an employee’s income, and employers must pay for the equivalent of 60 percent of the actuarial value of a worker’s coverage. Businesses that fail to do so will eventually face a fine of up to $2,000 for each employee not offered coverage, though workers are not required to sign up for the benefits.”

The Obama administration has maintained that medium-sized businesses, those with 50 to 99 employees, need more time to prepare for implementation. The employer mandate, which penalizes companies that do not comply, has been delayed until 2016 for these medium-sized companies.

House Republicans contend that the president does not have flexibility in implementing the law.

“No member needs to be reminded about the bonds of trust that have been frayed or the damage that’s already been done to our economy and to our people,” House Speaker John Boehner (R-OH) dramatically declared. “Are you willing to let any president choose what laws to execute and what laws to change?”

Democrats in the House accused Republicans of playing politics ahead of the fall elections, warning that it presaged articles of impeachment.

“The lawsuit is a drumbeat pushing members of the Republican Party to impeachment,” Representative Louise Slaughter (D-NY) said.

Speaking from Kansas City, the president said that he acts “when Congress won’t.”

The president stressed that he wanted to work with Congress on a host of issues but that the country “can’t wait”.

“They’re going to sue me for doing executive actions that help people. They’re mad because I’m doing my job,” the president said, adding that the “only reason” why he is issuing executive orders is “because [Congress] doesn’t do anything.”

Republicans contend that the actions are an abuse of power, even though President Obama has used fewer executive orders than any president since Grover Cleveland.