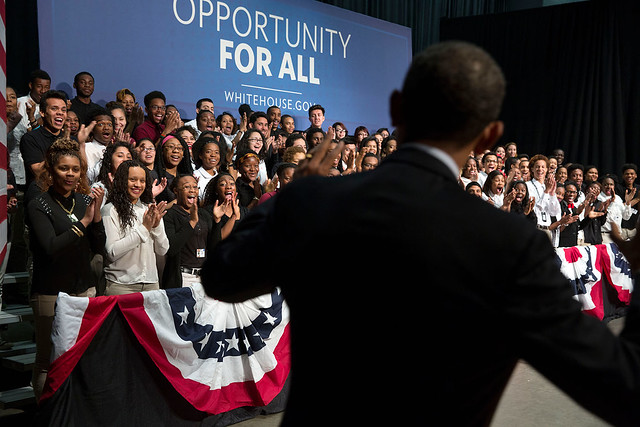 President Obama delivered a speech on the economy today from Kansas City. The president was in high spirits as he spoke to an enthusiastic crowd. The atmosphere was that of campaign season, flanked with a diverse crowd of dozens of young people on stage.

The energetic president had good reason to be happy. The Commerce Department reported earlier this morning that the US economy grew 4 percent in the 2nd quarter of 2014. Data from earlier in the month showed that the US economy added nearly 300,000 jobs in June as the unemployment rate dropped to 6.1 percent nationally.

The president spoke of a man named Victor, who had introduced him to the crowd. Victor had been unemployed but went back to school and found a full-time job. The president said that Victor and millions of other Americans were able to afford health insurance now due to the Affordable Care Act. He also noted the administration’s recent announcement that student loan repayments would be capped at 10 percent of income each month. The executive order changes student loan regulations but may not take effect until 2015.

“I don’t want our young people saddled with debt before they’ve even started in life,” Obama said.

Republicans in Congress were quick to criticize the proposal when it was announced in June. Republican House Speaker John Boehner called it a “much-hyped loophole” while Republican Senator Lamar Alexander of Tennessee said that “college graduates don’t need a $1 a day subsidy to help pay a $27,000 loan. They need a good job.”

The president, however, says that “Victor is the sort of person [that] I’m working for every day.” Obama cited his administration’s efforts to raise the minimum wage as proof, which he said would be “good for everybody.”

“It starts not from the top down but from the bottom up.”

The president also ran off a laundry list of ideas to continue job growth, which he says has resulted in businesses adding “over ten million new jobs over the past 52 months.”

The president outlined an agenda that includes building a “cutting edge” green economy, infrastructure spending, advanced manufacturing, investing in research and science, job training, and preparing students for the economy with a quality education.

“They said no to raising the minimum wage,” the president said of Congressional Republicans. “No to fair pay… no to immigration reform.”

The president stressed that he wanted to work with Congress but that the country “can’t wait”.

“That’s when we act, when Congress won’t.”

The Obama administration has taken a number of executive actions to address pressing issues, including an increased minimum wage for federal workers and contractors, relief to undocumented children who were raised in the US, and workplace protections for LGBT employees of federal contractors. The White House notes that they would prefer to act on these issues through Congress but that the president has the authority to act as the chief executive on these matters.

“Imagine how much further along we’d be, how much stronger our economy would be, if Congress was doing its job, too.”

Republicans have accused the president of abusing his power through executive orders. Senator Ted Cruz of Texas claims that an “imperial presidency” exists under Obama while Representative Michele Bachmann has said that Obama “may think he’s a king, he may declare himself king, but that’s not what he is under our Constitution.” Several Republicans have even floated the idea of impeachment for alleged overreach.

An analysis of executive order history shows that Obama has used the authority fewer times on average per year than any president since Grover Cleveland. In his second term, he has issued fewer orders than any presidential term since James Garfield in 1881, who only served for six months.

Finally, President Obama brought up Speaker of the House John Boehner’s proposed lawsuit seeking court intervention to force the administration to enforce the Affordable Care Act’s employer mandate, which has been delayed.

“They’re going to sue me for doing executive actions that help people. They’re mad because I’m doing my job,” the president said, adding that the “only reason” why he is issuing executive orders is “because [Congress] doesn’t do anything.”