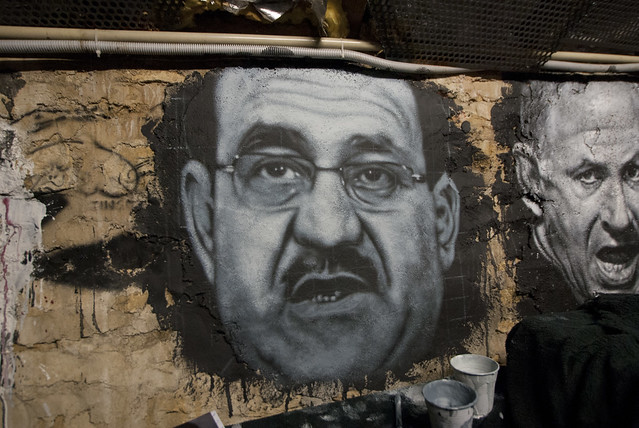 As the U.S. reportedly began directly arming Kurds in northern Iraq to help them fight radical militants, a political fight is escalating in Baghdad, with Prime Minister Nouri al-Maliki — who until Monday was largely backed by the U.S. — refusing to give up power after Iraq’s new president on Monday nominated the deputy parliament speaker to form the new government.

Haider al-Ibadi, a member of the same Shiite Islamist Dawa Party that Maliki belongs to, now has 30 days to form a new government and present it to parliament for approval. In a televised address, he vowed to form a government to “protect the Iraqi people” from Islamic State of Iraq and Syria (ISIS) insurgents who are terrorizing civilians in the north. The new government must offer meaningful roles to Iraq’s main minority factions, Sunnis and Kurds, according to the country’s constitution.

“We all have to cooperate to stand against this terrorist campaign launched on Iraq and to stop all terrorist groups,” al-Abadi said in remarks broadcast on state television.

Experts claim that Iraq’s political crisis — which in turn allowed the Islamic State of Iraq and Syria (ISIS) to gain a foothold in the country — stems from the U.S. invasion in 2003, at which point sectarian divisions became the norm.

In an interview with Jadaliyya in June, Haverford College professor and Iraq specialist Zainab Saleh explained:

The institutionalization of sectarian politics after 2003 has had a catastrophic impact on Iraq. It made the formation of a genuinely national government viewed as credible and legitimate by the majority of its citizens impossible. Iraqi political life instead became dominated by parties and politicians with narrow communal agendas, whose main concern has been to preserve their own role and marginalize rivals, including those with similar politics. The new political system additionally led to the alienation of Iraq’s Sunni community, whose members were characterized as either Ba’thist remnants or insurgents determined to undermine the Iraqi state. This institutionalized sectarianism resulted in a spike in sectarian violence, especially between 2006-2008. Under such conditions secular, inclusive voices have been altogether marginalized.

The New York Times reports that Monday’s nomination “came hours after a dramatic late night television appearance in which a defiant Mr. Maliki challenged the Iraqi president, Fouad Massoum, and threatened legal action for not choosing him as the nominee. As he spoke in the middle of the night, extra security forces, including special forces units loyal to Mr. Maliki, as well as tanks, locked down the Green Zone and took up positions around the city, heightening the sense of drama.”

According to the Associated Press, “Maliki deployed his elite security forces in the streets of Baghdad, partially closed two main streets — popular spots for pro and anti-government rallies — as hundreds of his supporters took to the streets, raising fears that he might use force to stay in power.”

The Washington Post described the developments as having “all the markings of a political coup.”

Amidst news that the U.S. has begun sending weapons directly to Kurds to aid in their battle against Islamic State insurgents — where previously it insisted on selling weapons only to the Iraqi government — U.S. Secretary of State John Kerry urged Maliki to avoid fueling further instability.

Elected officials in Iraq have “clearly made a statement that they are looking for change,” Kerry said in Sydney on Monday. “Our hope is that Mr. Maliki will not stir those waters.”

Maliki has been accused of creating a divisive and sectarian atmosphere during his time in office by alienating Kurdish and Sunni minorities, which in turn allowed radical groups like ISIS to capitalize on disunity and create a humanitarian crisis.

Earlier this year, Ned Parker and Raheem Salman wrote for Reuters that “the fall of Mosul, Iraq’s second-largest city, to Sunni militants this week was facilitated by the sectarian distrust and stalemate among Iraq’s political leaders.”

It’s not clear that al-Ibadi will be able to break through the sectarian turmoil.

In the Jadaliyya interview, Saleh continued:

The key question is not whether al-Maliki will remain in office; any successor—who according to the current sectarian allotment of positions must also be Shi’a—will similarly manipulate communal sentiment and fears to weaken rivals and aggrandize power.

The problem is the sectarian quota system. Based on the marginalization of secular and national forces, it presents a huge challenge to any serious political solution in Iraq. The sad reality is that once sectarianism becomes institutionalized it is very difficult to overcome. It produces powerful vested interests that will fight off any attempt to change it. Indeed, as we have seen since 2003, it empowers and even produces communal forces, including armed militias, who act to perpetuate the system while marginalizing secular and national forces that are reduced to the role of dissidents.