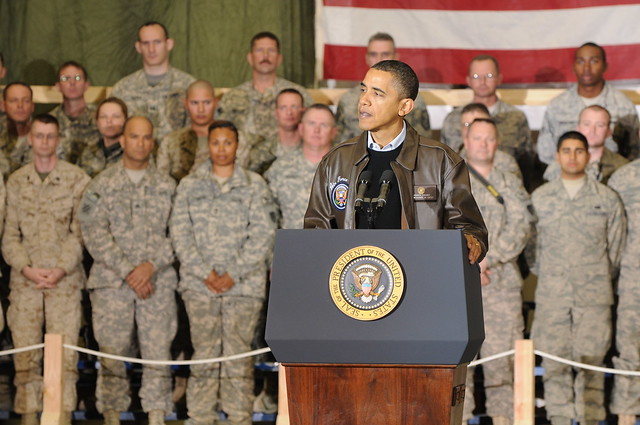 President Obama spoke Monday afternoon about the situation in Ferguson, Missouri. He called for an end to violence in the streets and announced an independent investigation into the police shooting death of unarmed teenager Michael Brown.

“The Justice Department has opened an independent, federal civil rights investigation into the death of Michael Brown,” the president said. “They are on the ground, and along with the FBI, they are devoting substantial resources to that investigation.”

The president is sending Attorney General Eric Holder to Ferguson on Wednesday. Holder will meet with leaders in the community and officials on the ground where protests have ensued for over a week now.

“We have all seen images of protesters and law enforcement in the streets. It’s clear that the vast majority of people are peaceful protesting. What’s also clear is that a small minority of individuals are not,” the president said. “While I understand the passions and the anger that arise over the death of Michael Brown, giving into that anger by looting, or carrying guns, and even attacking the police only serves to raise tensions and stir chaos. It undermines, rather than advances, justice.”

Police have fired rubber bullets and tear gas on protesters, arrested and threatened arrest of journalists covering the story, and created a police state-like atmosphere in the suburb of just over 20,000 people. Missouri Governor Jay Nixon announced Monday that he is sending in National Guard troops. However, an announced night-time curfew in the city has been lifted.

The president made clear that the excessive force being used on protesters is unacceptable.

“Let me also be clear that our constitutional rights to speak freely, to assemble, and to report in the press must also be vigilantly safeguarded, especially in moments like these. There’s no excuse for excessive force by police or any action that denies people the right to protest peacefully. Ours is a nation of laws — for citizens who live under them and for the citizens who enforce them.”

While the president was clearly critical of both a handful of violent protesters and the disproportionate police crackdown on peaceful protests, he nonetheless struck a conciliatory tone. The president emphasized the need to unite, not simply to divide.

“Let me call once again for us to seek some understanding rather than simply holler at each other. Let’s seek to heal rather than to wound each other. As Americans we have to use this moment to seek out our shared humanity that’s been laid bare by this moment… That requires that we build, not tear down.”

After his prepared remarks, an AP reporter asked the president about the militarization of police departments across the country. The president was cautious in his response, noting the historical role of law enforcement and the necessity of police to adapt to changing times.

“I think one of the great things about the United States has been our ability to maintain a distinction between our military and domestic law enforcement. That helps preserve our civil liberties. That helps ensure that the military is accountable to civilian direction. And that has to be preserved.”

The president went on to argue that proper equipment for potential terrorist attacks, such as hazmat suits and radios, was a good thing, but that a review of the military’s grant program to law enforcement would be useful.

“I think it’s probably useful for us to review how the funding has gone… how local law enforcement has used grant dollars to make sure that what they’re purchasing is stuff that they actually need. Because here is a big difference between our military and our local law enforcement, and we don’t want those lines blurred. That would be contrary to our traditions.”

The president did not outline in specificity how he would change the current situation with law enforcement militarization, although he noted that there likely would be bipartisan support for modifying the military equipment surplus grant program. He did not go to the extent of calling for the de-militarization of police departments, as some members of Congress and the South Bend Voice have advocated.