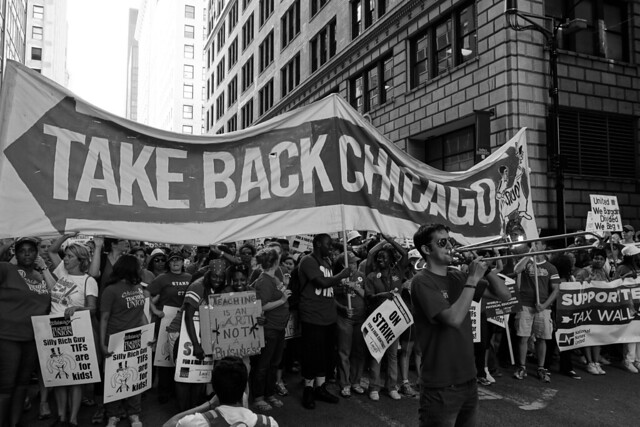 Over one hundred Chicago public school students, parents, and community members marched to the city’s Board of Education on Monday to demand an end to the school closures, mass lay-offs, and undemocratic political deal-making they say are devastating one of the largest public education districts in the country.

Organized by the Chicago Students Union, which spans 25 of the city’s schools and boasts over 200 student participants since it launched last year, the crowd held a mid-day press conference then marched to the headquarters of the Chicago Board of Education. At one point, a group of students entered the Board of Education building, where they recited spoken-word poetry about the effects of poverty and violence on their education.

Organizers say that, throughout the day, the student-led crowd was enthusiastic, hoisting signs and banners, with demonstrators chanting “Whose schools? Our schools!” and “Hey hey, ho ho! Rahm Emanuel has got to go!”—a reference to Chicago’s increasingly unpopular mayor. Since taking office, Emanuel has driven through a series of measures to privatize and shutter the city’s schools, leading to the closure so far of 49 elementary schools and one high school program—disproportionately in neighborhoods serving African-American and low-income communities.

“If you look at a map of Chicago where people of color live and where schools were closed, it is identical,” Ross Floyd, a senior at Jones College Prep High School in Chicago, told Common Dreams. “This is not a mistake. The education system purposely targets people of color and low income with school closure and cutting of resources in order to justify mass privatization.”

Students are demanding an end to the school closures; a voice in their education — through a proposed system for students to provide feedback about problems in their school; an education budget that prioritizes students’ needs; and the democratization of the city’s Board of Education. Since 1995, the Chicago mayor has retained total power to appoint people to this board. When Rahm Emanuel came to power in 2011, one of the first things he did was hand-pick a new school board—fueling his corporate education reform drive despite widespread opposition throughout the city, including a massive Chicago Teachers Union strike in 2012.

“I feel that students truly don’t have a voice in their own education, and that has to be changed,” Adia Njie, a sophomore at Lincoln Park High School, told Common Dreams. “To make this happen we have to make our voices loud.” Chicago to Become Largest US City with $13 Minimum Wage