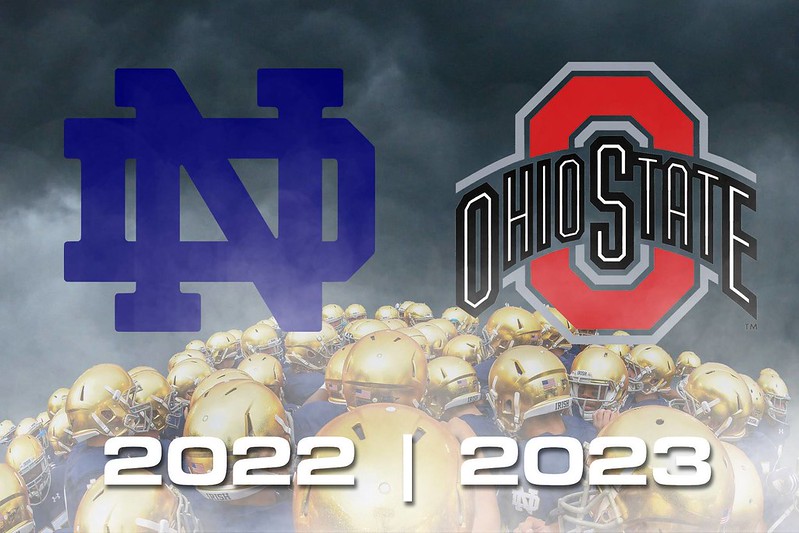 It may be eight years away, but that’s not stopping Notre Dame from announcing a big football series matchup. The university will play the Ohio State Buckeyes in Columbus on September 3, 2022 and again in South Bend on September 23, 2023.

“Any time you talk about Notre Dame and Ohio State meeting in a football game, that event automatically is going to have huge national significance,” says Irish head coach Brian Kelly. “For fans and alumni of the two schools, not to mention college football fans in general, these games will be great attractions.”

The agreement brings two of the most storied teams in college football head-to-head for the first time since in a regular season matchup since the 1995 and 1996 seasons when Lou Holtz was still the Irish coach. Urban Meyer, the current OSU head football coach, was actually a first-year coaching assistant at Notre Dame during the 1996 season.

If you are curious how the last matchup fared for the Irish, OSU took both games in the 90s. The Buckeyes also won a Fiesta Bowl appearance against Notre Dame in 2006. The all-time record between the two teams is 3-2. Notre Dame won the first two matchups in the series back in 1935 and 1936.

“I am excited we are able once again to bring these two programs together on the football field,” Notre Dame athletics director Jack Swarbrick said in a statement. “Football games between Notre Dame and Ohio State make great sense from a strength-of-schedule standpoint. In addition, with (Ohio State athletics director) Gene Smith having both played and coached football at Notre Dame–and with (Ohio State head coach) Urban Meyer having served as an assistant football coach at Notre Dame–there are some obvious, high-profile connections between our two institutions.”