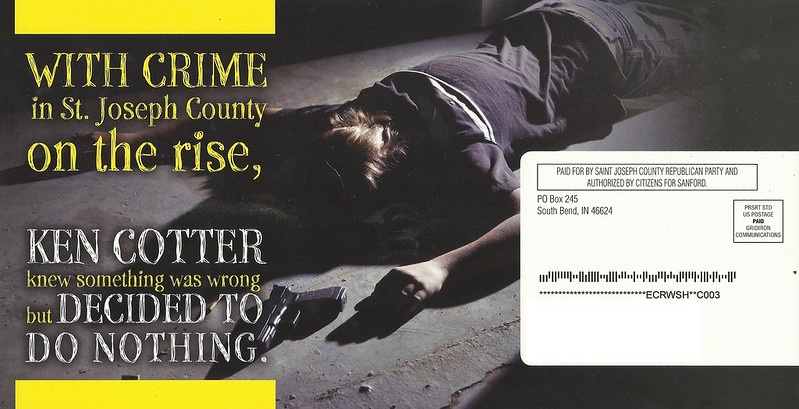 Local races in St. Joseph County have turned decidedly ugly in the home stretch as campaigns frantically search for votes in the last days of the 2014 election season.

While most of the candidates have remained above the fray throughout the campaign — as is often the case with local races — the St. Joseph County Republican Party is mailing out fliers attacking Democratic candidates for prosecutor and clerk.

“Like any campaign, local campaigns will work to distinguish their candidate from the opponent, and this can of course include going negative,” explains Jamie Smith, assistant professor of political science at IU South Bend.

And negative they have gone.

A mailer paid for by the St. Joseph County Republican Party accuses Democrat Ken Cotter of “blind loyalty” to outgoing prosecutor Michael Dvorak. The mailer says that Cotter lacks the leadership skills needed for the job.

“With crime in St. Joseph County on the rise, Ken Cotter knew something was wrong but decided to do nothing,” the mailer says.

A picture of a man murdered from a gunshot wound is shown on the front of the flier along with the words “crime,” “Ken Cotter” and “decided to do nothing” — all capitalized for emphasis.

The mailer was authorized by Citizens for Sanford, the campaign committee of GOP prosecutor candidate Jeffrey Sanford.

“We need a leader that is less concerned about his own interests and more concerned about the safety of those he serves,” the mailer concludes with a picture of Cotter in blood red. 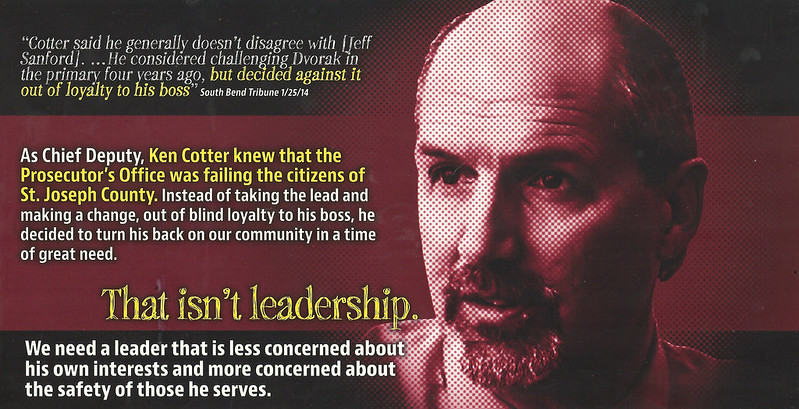 Cotter, who has spent the bulk of his campaign running on his record as a deputy prosecutor in St. Joseph County, defended his nearly 20 year career.

“I am not going to be distracted by these types of political games,” Cotter told the South Bend Voice.

“The focus of my campaign remains on the contributions I have made to our community in my 12 years as a Chief Deputy Prosecutor such as our 95% Metro Homicide conviction rate. I look forward to the opportunity to translate my personal success to the whole Prosecutor’s office.”

The allegation that Cotter avoided a primary challenge against Mike Dvorak in 2010 out of “blind loyalty” — as the county GOP argues rather oddly — is a seemingly innocuous message compared to the tone from the Aaron Troutmiller campaign for county clerk.

The Republican challenger has accused Democratic incumbent Terri Rethlake of public corruption and incompetence through his Facebook page. A campaign mailer sent from the St. Joseph County Republican Party has made similar allegations.

Going beyond reasoned arguments over policy, Troutmiller has used a Facebook page to publicly trash his opponent and members of the media.

The attacks are personal in nature: Troutmiller calls Rethlake a “criminal” in one image posted on his Facebook page. 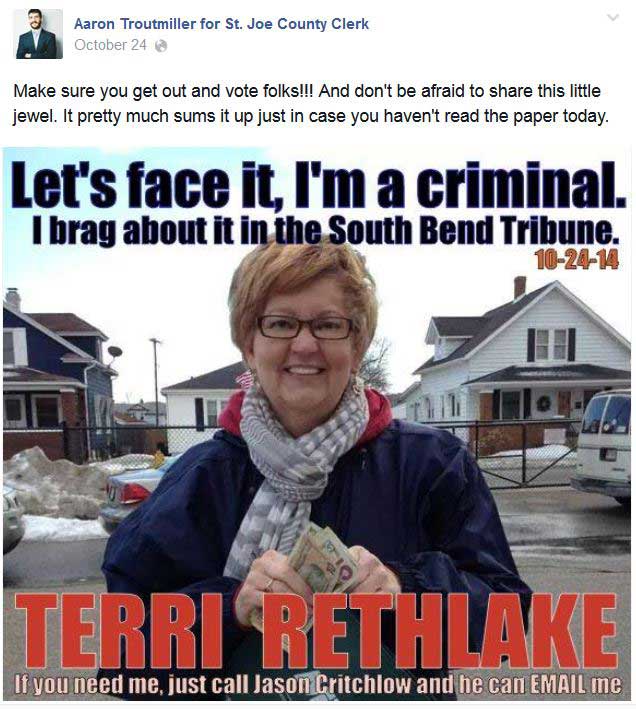 Rethlake has neither been convicted of a crime, nor investigated for one.

The Republican candidate also accuses his Democratic opponent of using tax dollars for campaign operations, “voter intimidation” and acting as a “crony of Butch Morgan,” the former St. Joseph County Democratic Party chief who was sentenced to one year in jail. Morgan was convicted for forging signatures to place then-Senator Barack Obama and Senator Hillary Clinton’s names on the Indiana presidential primary ballot in 2008.

Rethlake had no connection to the scandal.

However, the incumbent has in fact had a number of issues with reporting during her tenure. The Indiana State Board of Accounts cited cash reconcilement of the county’s main bank account and trust balances, as well as untimely monthly financial reporting as trouble areas in 2013.

A separate state audit revealed that nearly $47,000 was “unidentified” in the county’s record books from 2012. A South Bend Tribune report found that the county’s actual balance was higher than what was reported, indicating that no wrongdoing had occurred.

Rethlake defended her record in a statement to the South Bend Voice.

“It is disappointing to see my opponent using misleading statements and outright lies to distract voters from his own lack of a record or voting experience, but I refuse to respond with more negativity. I am very proud of my accomplishments and the service I have provided to help move our community forward. My campaign will remain focused on that,” Rethlake says.

Troutmiller’s criticisms have not been limited to his opponent. South Bend Tribune reporter Amanda Gray has drawn the ire of the GOP’s clerk candidate.

“I feel this woman is working hard to keep my opponent in office,” Troutmiller complained in a Facebook post.

In another post, he called the South Bend Tribune a “disgrace to the 1st amendment”. 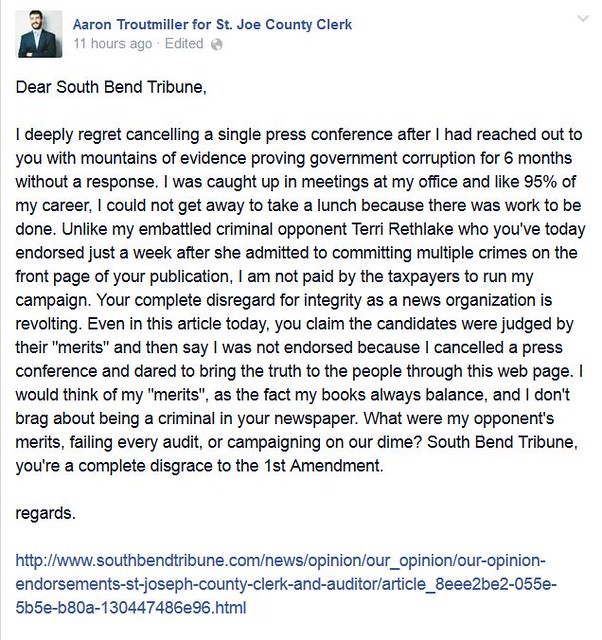 “The County Democratic Party and our candidates, will not be spending a single dime on negative mailers because we are proud to stand by our candidate’s record of accomplishments and service to our community, and we believe the voters deserve better,” Critchlow says.

“The Republicans know they can’t win based on the facts or issues so they are spending 10s of thousands of dollars on lies and misleading statements trying to sling enough mud to cover for their own candidate’s lack of qualifications. Their candidate for Prosecutor has little prosecutorial experience to our candidate’s nearly 20 years. Their candidate for Clerk has never even voted in an election before and has no experience relating to Circuit Court to our candidate’s 25 years. The list goes on and on.”

South Bend Voice requested a response from the St. Joseph County Republican Party but one was not received as of the time of publication.

The tone of the mailers is a big contrast from the message at last week’s IU South Bend-sponsored candidate forum. Professor Jamie Smith says that he believes all of the mailers at that event were positive and “aimed at defining the candidate’s characteristics and qualifications for the job.”

Professor Smith points out that elections for county offices are generally considered “low information races.” Attacking an opponent in a local race distracts from advancing your own name into the public sphere. Name identification is particularly important in these races; helping to put out your opponent’s name might not be a great strategy.

“Related to this, is the small amount of resources candidates have for local elections. As opposed to Congressional campaigns where resources are abundant and candidates are buying airtime for television ads, local candidates will be putting a greater emphasis on grassroots tactics and mailers,” Smith adds.

Typically, county races are less negative than national races since “the nature of these county posts makes them less prone to partisan-driven negative campaigning.”

And what about the effectiveness of negative campaigning?

“Like most things in politics, negative campaigning’s effects vary depending on whom you ask,” Smith says. “It is clear that campaign managers believe them to be effective; otherwise, campaigns and candidates wouldn¹t continue to spend large sums of money on negative advertising.”

According to Smith, the social science research on negative campaigning is mixed on its effectiveness.

“Some experimental studies find that negative ads suppress turnout, while others have found it to increase turnout. In a 2006 experimental study in the journal Political Research Quarterly, David Niven explored the effects of negative campaign mailers at the city level and found a positive effect on voter turnout.”

Smith adds that one of the risks of negative campaigns is “increased citizen cynicism about politics.”

“If voters view negative ads as a representation of the overall state of politics, they may choose not to vote at all,” Smith says.

Whether the tactics are effective or not, it looks like St. Joseph County voters — like most voters across the country — will have to deal with it for five more days.