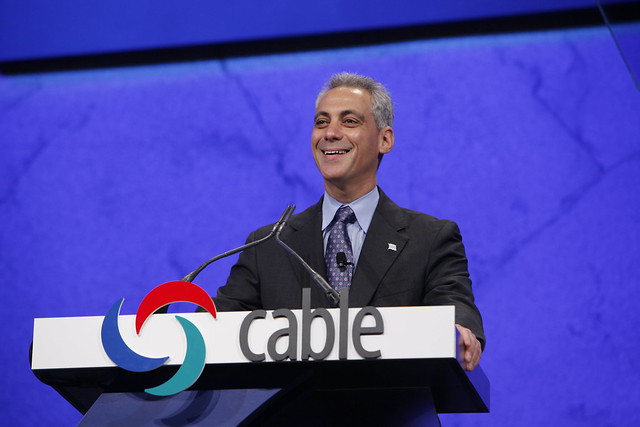 Preckwinkle holds an astonishing 24 point lead over Emanuel in a potential head-to-head race. Emanuel fares better against Lewis, who leads the controversial mayor by 9 points. Both results are outside of the 3.04 percent margin of error. The poll was taken on July 9 and had 1,037 respondents. Over a quarter of the respondents were from cellphones.

Meanwhile, Latinos were the only ethnic group that preferred Emanuel to Preckwinkle — 41 to 36 percent. However, Latinos preferred Lewis 41 to 37 percent.

The first-term incumbent of America’s third largest city might be considered an underdog against Preckwinkle and Lewis in early polling, but he does lead two lesser known rivals. Robert Shaw, a former alderman for the 9th Ward and a Cook County commissioner has already announced intentions to run in the February 2015 mayoral election. Emanuel would lead Shaw 48 to 30 percent if the election were held today. Emanuel likewise leads Alderman Robert Fioretti 45 to 30 percent. Fioretti has not yet announced officially but is openly considering a run.

Emanuel has pursued privatization, school and mental health clinic closings, and fee increases, including a controversial plan to install speed cameras throughout the city, during his short time at the helm of city hall. The often brash mayor famously collided with teachers in the city’s first teacher strike in 25 years. The strike centered on wages, standardized testing, and extended school hours. Teachers contended that they were not being fairly compensated for Emanuel’s plans for an extended school day.

“I think it says a lot about how people in Chicago are completely fed up with this sort of top-down policy that really excludes the majority voices from the democratic process of governance,” Lewis told the Chicago Sun-Times, who commissioned the poll. “I think the people do not feel heard in this city. I think they feel that Rahm only listens to people he respects, and he only respects people who have money.”

Emanuel’s campaign, meanwhile, was dismissive of the results. “While the Mayor is focused on helping every neighborhood grow stronger, the campaign finds these inaccurate robo polls entirely laughable,” campaign spokesman Pete Giangreco told the Sun-Times.

The incumbent mayor has built a campaign war chest of over $6 million as of February. And as the Chicago Tribune points out, a large chunk of those have come from developers who need his administration’s approval to break ground.

Chicago’s mayoral election will be held on Tuesday, February 24, 2015. It is a non-partisan ballot. If none of the candidates win a majority of the vote, a runoff between the top two finishers will be held at a later date.