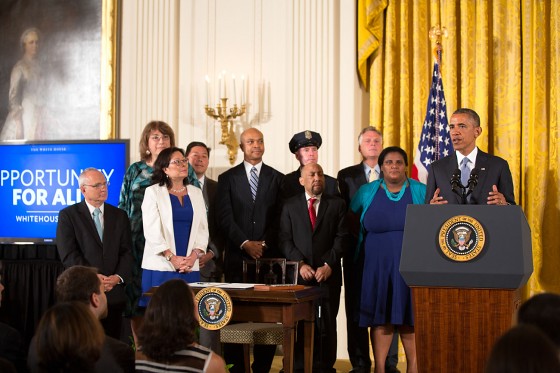 President Obama signed an executive order on Monday that bans workplace discrimination based on sexual orientation and gender identity among federal contractors. The executive order gives the Secretary of Labor 90 days to come up with regulations implementing the requirement.

“America’s federal contracts should not subsidize discrimination against the American people,” Obama said at the White House prior to signing the executive order. “I’m going to do what I can with the authority I have to act.”

The two-page order amends previous executive orders, one from Lyndon Johnson in 1965 and the other from Richard Nixon in 1969. President Obama’s order simply adds the words sexual orientation and gender identity to the previous anti-discrimination orders.

Executive Order 11478, signed by President Nixon, prohibits discrimination in employment in the federal workforce, including the US Postal Services, on the basis of race, color, religion, sex, national origin, handicap, and age. President Clinton amended the order in 1998 to include sexual orientation. Obama went a step further, adding gender identity.

President Obama’s order becomes effective immediately. Contracts signed on or after the date of the Department of Labor’s rules will be covered under the executive order.

It is still legal in 29 states for employers to fire an employee for being gay. The executive order applies only to federal contractors so gay employees working in a private business can still be fired in a majority of states. The Employment Non-Discrimination Act (known as ENDA) would bar employment discrimination in all workplaces but it would require an act of Congress. John Boehner, the Speaker of the Republican-controlled House of Representatives, has not agreed to bring ENDA up for a floor vote.

The full order can be read below: