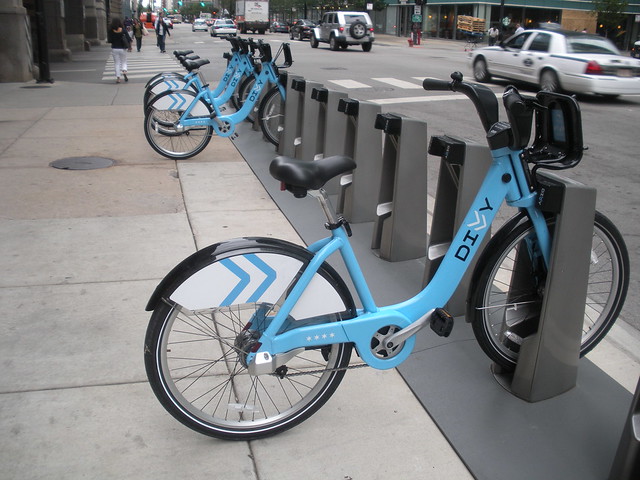 As city bike share programs sprout up in metropolitan areas nationwide and local governments attempt to tally the cost-benefit of such programs, analysts note that the “costs” of bike shares pale in comparison to the untold social and environmental costs of cars.

According to a Reuters article published on Wednesday, since the first bike share program began in Tulsa, Oklahoma in 2007 there have been no fatalities recorded among users—despite the dire predictions of many.

Thirty-six cities, including New York, Chicago, Minneapolis, Washington DC and San Francisco have thus far instituted such programs, where users pay a regular fee to access shared bicycles parked strategically throughout a city. Next spring, Philadelphia plans to launch its own share program and other services are currently in the works in Tampa, Florida, Boise, Idaho, and Portland, Oregon, among others.

However, as Reuters points out, some local programs have been challenged by stifled enrollment and some rising costs. Citibank, which first sponsored the program is New York, is contemplating a takeover by a new operator, REQX Ventures, which reportedly has plans to expand further into Manhattan and Brooklyn, as well as into Queens. Further, as its enrollment has dropped slightly since it began, according to reports, Citi Bike is planning to boost its yearly membership fee from $95 to $140, or more.

According to environmental economist Timothy Hamilton, assistant professor of economics at the University of Richmond, when weighing the cost-benefit of bike share programs, cities should consider a number of aspects: environmental benefits, expansion of public transportation (as more subway and bus stops are now more accessible because of the public bike sharing), as well as the health benefits of getting people on a bike.

The primary goal of such share programs, Hamilton says, is to reduce the amount of cars on the road. “That cyclist means one less car on the road and thus fewer emissions,” Hamilton told Common Dreams. Hamilton, along with coauthor Casey Wichman, an economics graduate student at the University of Maryland, is currently researching the impact of bike share programs on traffic congestion and tailpipe emissions in metropolitan areas.

He contrasts these benefits with many of the social costs or “externalities” associated with driving which are often not accounted for in most assessments, including carbon emissions, wear and tear on roads, and increasing road congestion.

“There are of course going to be costs associated with bike share programs,” Hamilton continues, adding that if they “offer the benefits of reducing air pollution and reducing traffic congestion, that’s reason for governments to get involved and subsidize bike share programs.”