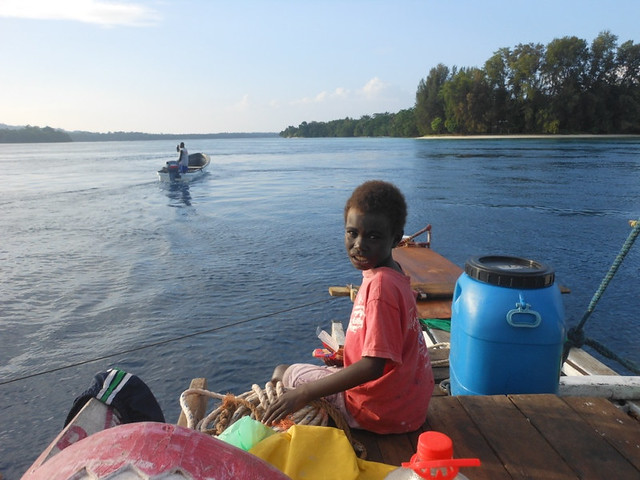 In an unprecedented move that illustrates the dramatic impacts of planetary global warming, one community in the South Pacific has decided it has no choice but to pick itself up entirely and flee for higher ground.

All too aware of their vulnerability to the effects of climate change — such as rising sea levels and extreme weather events — communities in the Pacific Islands have long acknowledged that their very existence is threatened by global warming.

But now, authorities in a town on Taro Island, a coral atoll off Choiseul in the Solomon Islands that sits less than seven feet above sea level, have decided to relocate to the mainland in response to increasing coastal hazards including tsunamis, storm surges, and erosion. The exodus from Choiseul Bay Township, the provincial capital that’s currently home to about 500 people, will take place over many years. It is the first such official migration — of people, services, and facilities — in the Pacific Islands.

According to Reuters, “the groups behind the Choiseul adaptation plan said it is being hailed by the Solomon Islands national government as a model for other provinces across the nation and more broadly across the Pacific.”

The plan comes out of Choiseul Bay Township’s consultation with a team of engineers, scientists and planners, funded by the Australian government, on how best to adapt to the impact of climate change. Extensive community input was solicited, Choiseul Province premier Jackson Kiloe said in a statement Friday.

“Relocation is the only option available that will keep the community safe and will allow for future growth and prosperity of the capital and the province,” said Philip Haines, project manager at BMT, an engineering firm that worked on the plan.

Land to build a new, larger settlement that could accommodate up to 5,000 inhabitants has already been acquired, Haines told Reuters. The town will essentially have to be built up from scratch, with a hospital and school expected to be constructed within five years. In the meantime, the plan prescribes detailed actions to increase the community’s resilience to climate change, including the preparation of a tsunami response plan, and the handover of a hand-wound siren to alert the local communities of a tsunami warning.

The Solomon Islands government would be looking for climate change funding from international donors to finance the relocation, Reuters reports.

Some of that funding could come from the U.S., which has millions invested in Asia-Pacific climate change adaptation, as U.S. Secretary of State John Kerry pointed out when he visited the Solomon Islands just last week.

I just came from the Solomon Islands yesterday, a thousand islands, some of which could be wiped out if we don’t make the right choices. The Pacific Islands across the entire Pacific are vulnerable to climate change. And just yesterday, I saw with my own eyes what sea level rise would do to parts of it: It would be devastating — entire habitats destroyed, entire populations displaced from their homes, in some cases entire cultures wiped out. They just had flash flooding in Guadalcanal — unprecedented amounts of rainfall. And that’s what’s happened with climate change — unprecedented storms, unprecedented typhoons, unprecedented hurricanes, unprecedented droughts, unprecedented fires, major damage, billions and billions of dollars of damage being done that we’re paying for instead of investing those billions of dollars in avoiding this in the first place.