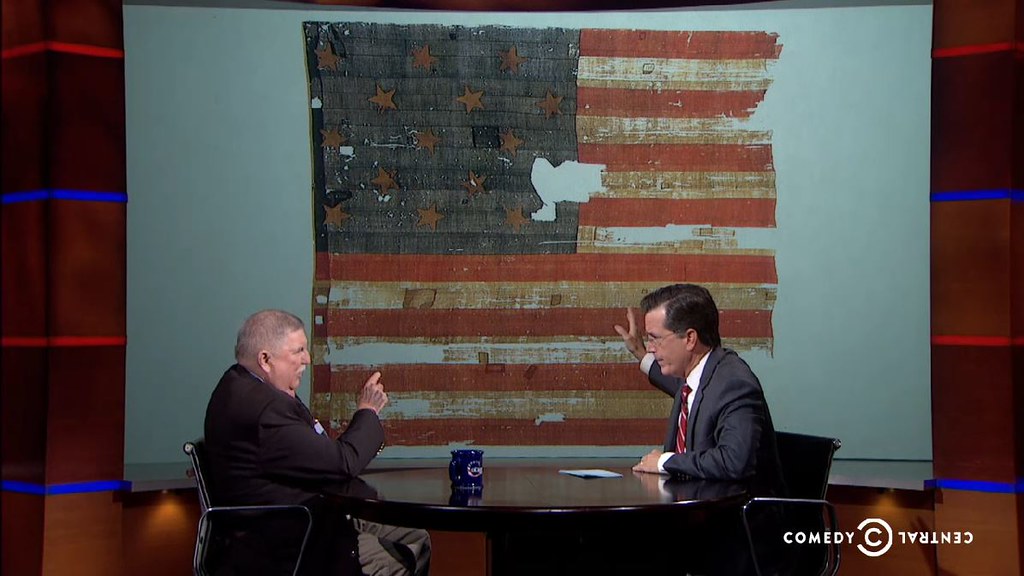 Oh say can you see. The 200th anniversary of the Star Spangled Banner was last week. Stephen Colbert commemorated the occasion with Lonn Taylor, co-author of The Star-Spangled Banner: The Making of an American Icon and a former historian at the Smithsonian’s National Museum of American History.

The Star Spangled Banner, of course, is the national anthem of the United States. The song was created in 1814 by Francis Scott Key, a lawyer and amateur poet. It depicts the British bombardment of Fort McHenry during the War of 1812.

Up until that time, multiple anthems served patriotic purposes. My Country, ‘Tis of Thee was a de facto national anthem, which coincidentally shares a melody with Britain’s national anthem, the country that the US gained independence from in 1776. The Star Spangled Banner competed with other popular songs of the time for patriotic recognition, including Yankee Doodle and Hail, Columbia.

That is, until Congress officially recognized the Star Spangled Banner as the national anthem in 1931.

The flag that inspired Key’s song was known as the Star Spangled Banner. It was designed to be “so large that the British would have no difficulty seeing it from a distance.” The flag measured an impressive 30 by 42 feet when originally constructed, taking nine people to complete it.

“The commander of the fort, Major George Armistead, essentially took it home as a personal souvenir, even though it was a very expensive piece of government property. It cost four hundred bucks,” Taylor noted.

The flag is now in the possession of the National Museum of American History, although it is shorter than its original length due to deterioration and pieces that Armistead cut off as souvenirs.

At the end of the show, Colbert invited Chicago Blackhawks official national anthem singer Jim Cornelison to perform the Star Spangled Banner. You can watch that below: