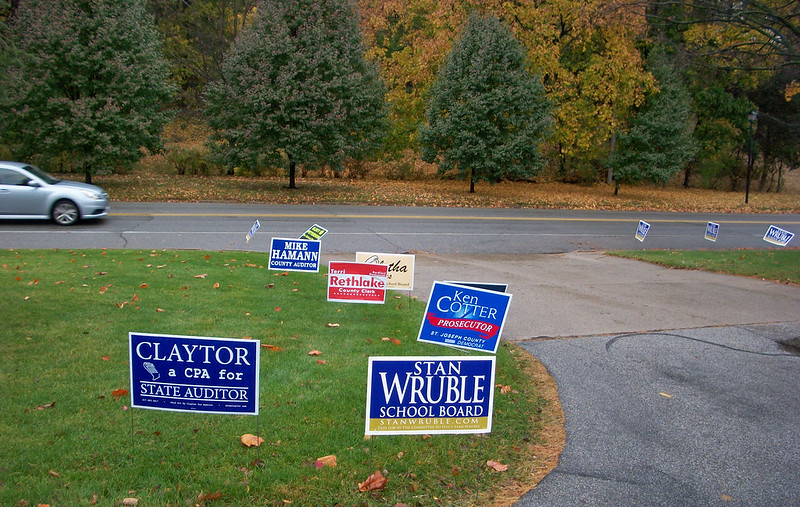 On the same night that Democrats got walloped nationally — losing control of the Senate, a number of governor’s races and House seats — the party held firm in their control of St. Joseph County’s countywide offices.

Democrats prevailed in the races for county auditor, clerk and prosecutor. All incumbents for County Council also won their races.

The biggest race of the night on the local level was for county prosecutor. It was expected to be close, but ended up being the largest win for Democrats countywide.

Ken Cotter — a 19 year veteran of the prosecutor’s office — staved off a credible challenge from Republican Jeffrey Sanford. Cotter received 54 percent of the vote to Sanford’s 46 percent.

Rethlake fought to the end in a race that featured negative campaign mailers and accusations of being a “criminal” from her Republican opponent, Aaron Troutmiller.

The closest race of the night was for St. Joseph County Council District B. Democratic incumbent Corey Noland narrowly led Republican challenger Dennis Jordan by a margin of 36 votes — proving that every vote counts. Democrats will continue to control the County Council.

While acknowledging that the party came up short against Representative Jackie Walorski, St. Joseph County Democratic Party Chairman Jason Critchlow expressed satisfaction with the results, and was not very subtle in condemning what he views as “smear” tactics against the party’s candidates.

“We are pleased that the majority of voters were not duped by attempts by the County Republican Party to smear the Democratic candidates. I think it speaks volumes to each candidate’s qualifications that they were able to overcome such tactics. The community will be well served by each newly elected or re-elected individual,” Critchlow said in a statement last night.

“We came up short,” he says. “When you spend over a year of your life working towards one goal and you fail, it is a very humbling experience. We set out to accomplish very specific feats: take control of the county council and perhaps pick up one or both: the County Prosecutor and County Clerk’s races in St. Joseph County. We failed on all counts.”