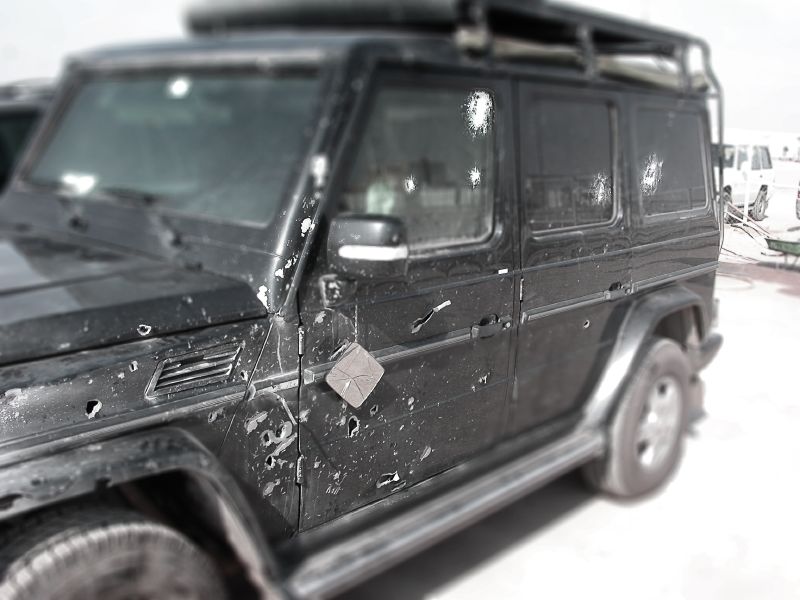 More than seven years after guards with the private mercenary company Blackwater opened fire on Iraqi civilians in downtown Baghdad, killing 17 people and wounding 20, a federal jury on Wednesday found four of the men involved with the massacre guilty in the case.

Former guard Nicholas Slatten was handed a guilty verdict for first-degree murder, the Associated Press reports. The other men, Paul Slough, Evan Liberty and Dustin Heard, were all found guilty of voluntary manslaughter.

The men were employed by the U.S. State Department at the time of the massacre at Baghdad’s Nisour Square on September 16, 2007, whose victims included 9-year-old Ali Kinani—killed by a gun shot to the head. The killings, reported as the largest known massacre of Iraqi civilians by U.S. private contractors, became a flashpoint of outrage over the atrocities U.S. forces—particularly private contractors—inflict on occupied civilian populations in Iraq.

The guilty verdicts follow years of legal battles, in which plaintiffs were left unsure of whether the defendants would ever face trial. Seventy-two witnesses were summoned for the trial, including Iraqis victimized by the attack. Though seventeen people were killed, the guilty verdict was based on charges related to only fourteen of the victims.

During his closing argument against the Blackwater guards, federal prosecutor Anthony Asuncion said: “These men took something that did not belong to them: the lives of 14 human beings. They were turned into bloody bullet-riddled corpses at the hands of these men.”

Advocates for the victims welcomed the ruling.

“While today’s verdict cannot bring back the innocent Iraqis killed at Nisoor Square, it is a step towards full accountability for Blackwater’s actions,” said Baher Azmy, Legal Director for the Center for Constitutional Rights, which represented Iraqi victims of the killings in a human rights suit against Blackwater that settled in January 2010.

“However,” Azmy added, “holding individuals responsible is not enough. If corporations like Blackwater, now known as Academi, are granted the rights accorded to ‘people’ they must also bear the responsibilities.”

Dan Roberts, who has covered the trial closely for the Guardian newspaper, reports from Washington that all the men now “face the likelihood of lengthy prison sentences after unanimous verdicts on separate weapons charges related to the incident.”

And Jeremy Scahill, who has written extensively about both Blackwater and the Nisour Square massacre, responded to the verdict at The Intercept by writing, “Just as with the systematic torture at Abu Ghraib, it is only the low level foot-soldiers of Blackwater that are being held accountable.” Scahill points out that Blackwater founder and former-CEO Erik Prince and other high-ranking Blackwater executives remain free and that no U.S. officials from the Bush administration were ever held responsible for “creating the conditions for the Nisour Square shootings.”

According to Azmy, “Private military contractors played a major role in the pressure to go to war in Iraq and have engaged in a variety of war crimes and atrocities during the invasion and occupation, while reaping billions of dollars in profits from the war. To this day, the U.S. government continues to award Blackwater and its successor entities millions of dollars each year in contracts, essentially rewarding war crimes.” No Boots on the Ground? 1500 More Troops Heading to Iraq