A proposal that will realign South Bend’s TIF districts is one step closer to final approval. The South Bend Common Council on Monday voted 8-1 in favor of the redrawn TIF districts, which consolidates some districts and expands others.

Tax increment financing (TIF) is a geographic taxing area that diverts increased property tax revenue into a separate fund for the purposes of economic development in distressed areas.

Districts created prior to 1995 had no expiration under Indiana law until a change in state law this spring forced cities like South Bend to expedite the use of existing districts, all of which will now expire in 2025 or when debt service is retired.

The city’s Department of Community Investment proposed a realignment of its six current districts into three. The consolidation is somewhat misleading; the Central Development Area is being consumed by the much larger Airport Economic Development Area.

The airport district will add new territory along Lincolnway — connecting the airport and downtown — which is already seeing plans for new bike lanes, streetscaping, repaving and the creation of on-street parking. The city is also adding a large swath of Western Avenue and surrounding streets.

“There’s been a push to finish the gateways into the city,” Chris Fielding, the Assistant Executive Director with the Department of Community Investment told the South Bend Voice in August.

Parts of the East Bank Village neighborhood and Howard Park area are also being added to the new Northeast Neighborhood Development Area.

According to the city, South Bend’s reorganization means that “TIF Districts will focus resources on strategic priorities, which include redeveloping the Lincolnway West and Western Avenue corridors, the Jefferson Boulevard/Eddy Street South corridor, as well as creating jobs and new development at Ignition Park and several industrial zones throughout the city.”

The proposal was approved in an 8 to 1 vote before the Common Council. Henry Davis Jr. was the only vote against adoption. Davis called for further study. The final step is for approval before the Redevelopment Commission next month.

You can see the proposed changes on the maps below: 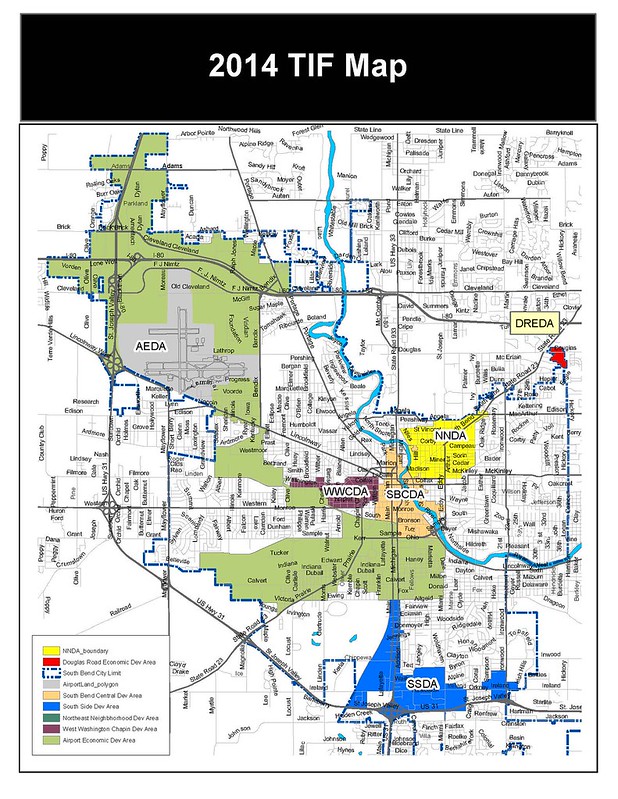